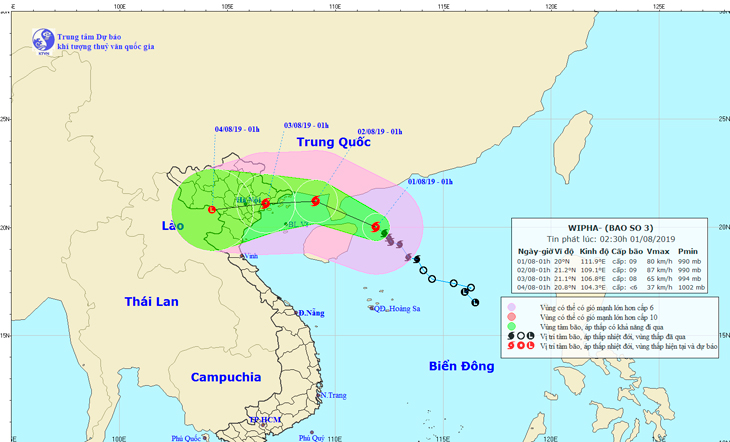 
More than 700 flights were cancelled or delayed on Wednesday, and Hong Kong came to a near standstill with transport services suspended as Tropical Storm Wipha hit the city.

Wipha also brought the year’s first No 8 typhoon warning, which was downgraded to a No 3 warning at 11.40pm as the storm continued to pass Hong Kong. And wow! Look at these flying crabs:

Wipha, the seventh typhoon this year, made a second landfall in southern China’s Guangdong Province Thursday evening after landing in the island province of Hainan on the same day.

#TyphoonWipha landed in S China’s Hainan Province on Thursday morning, blowing away trunks and roadside fences, and is expected to make another landfall in nearby Guangdong Province at noon. pic.twitter.com/q1hYSwqqus

Wipha landed in the city of Zhanjiang at about 5:40 p.m., packing winds of 83 km an hour near its center, according to the Guangdong provincial meteorological bureau.

The typhoon made landfall at around 1:50 a.m. in the city of Wenchang, Hainan, grounding flights and trains with strong winds and heavy rains. It is expected to track northwest and enter the southern parts of the Guangxi Zhuang Autonomous Region or the northern Beibu Gulf Thursday night.

Hainan has seen heavy rains from Tuesday evening, with maximum rainfall of 276.1 mm within 24 hours in Haikou, the provincial capital, the Hainan provincial meteorological bureau said.

On early Thursday morning, Typhoon Wipha landed in the town of Wenchang in northeastern Hainan Island. During the day, it is expected to move northwest and reach Beibu Gulf. pic.twitter.com/1kcTFwMCYc

No casualties have been reported yet.

The gales and heavy rains have disrupted local traffic. Haikou Meilan International Airport has cancelled 50 flights and the airport in the city of Sanya has cancelled six flights Thursday.

All ferry services in the Qiongzhou Strait, which separates Hainan Island from Guangdong Province, and high-speed rail services circling the island have been ordered to be suspended, while more than 100 bus routes in Haikou have stopped operation as of 10 a.m. Thursday.

I hope everybody is safe over there! Take care and be prepared because Typhoon Wipha is still strong and dangerous!

Dogs Can Be Aggressive For Lots of Reasons, And One of Them Is You : ScienceAlert
This Physicist Says Electrons Spin in Quantum Physics After All. Here’s Why : ScienceAlert
JWST Has Found Life’s Elemental Building Blocks in The Depths of Darkest Space : ScienceAlert
Intriguing Meteorite From Mars Reveals ‘Huge Organic Diversity’, Scientists Say : ScienceAlert
Newly Discovered Fossil Reveals Hundreds of Teeth ‘Never Seen Before in a Pterosaur’ : ScienceAlert