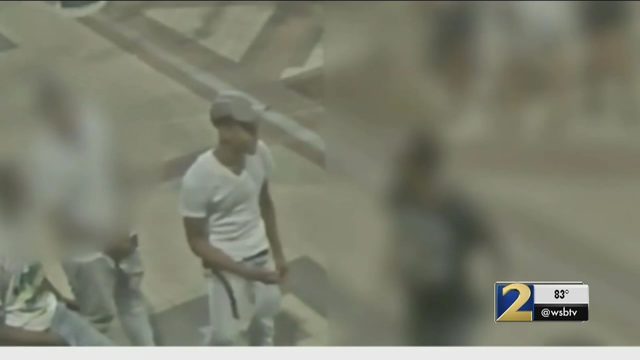 The shooting happened during a block party around 10:30 p.m. at the intersection of James P. Brawley Drive Southwest and Beckwith Street Southwest, police said.

Police said when officers arrived, they found four female students, ages 17 through 19, with injuries. They were taken to Grady Memorial Hospital and are listed as stable.

One girl was shot in the chest, another in the leg and bullets grazed two other girls.

The location was on the steps of a library used by Clark Atlanta University, Spelman and Morehouse students.

The shooter has not been caught.

Many students are unable to get home because their dorms are inside the crime scene pic.twitter.com/58j2ZHeZi3

On Wednesday, police released surveillance video of the man they believe shot the four teens and are asking for the public’s help to identify him. Police do not believe he is a student.

Channel 2’s Christian Jennings was on the CAU campus, where she talked to a student who witnessed the shooting.

Cyaira Plase was in the crowd of about 200 people who had gathered for a back-to-school block party when shots rang out.

“The shooter, he was in the middle of the crowd, and he just started shooting,” Plase said. “We seen the flash from the gun and then started running.”

“It appears there were two separate groups that were targeting each other and the students in the crossfire,” said Atlanta police Capt. William Rucker.

Jennings also talked to Derrick Daniels, a sophomore at CAU. He acted quickly when he realized that one of the girls who was shot needed help.

“I just went into autopilot and help mode,” Daniels said. “I took off my shirt and I helped her tie the shirt around her leg until Clark police and Atlanta police came.”

Jennings also spoke to a student who did not want to be identified, but said she was with one of the victims, Elyse Spencer.

“A certain song came on, and we heard gunshots,” she said. “At first, I thought the gunshots were part of the song.”

She was separated from her friends during the chaos and only later learned her friend had been hit.

Spencer’s mentor and friend, Lovely Wells, the mayor of Rochester, New York, said the teen interned for the city of Rochester as recently as last month.

“She is recovering. I was able to talk with her earlier today. She is a strong young lady,” Wells said. “It was a miracle that she’s here with us and that she’s recovering.”

Spencer posted on Twitter on Wednesday morning, thanking people for their prayers. A GoFundMe account has been set up by her family to cover medical expenses.

“One of our top priorities at CAU is the safety and security of our students. Here at Clark Atlanta University, and across the country, students have the right to gather together in celebration without the fear of violence. We will not stand for it in the Atlanta University Center. We are working diligently with Atlanta PD to identify those involved.”

Anyone who recognizes the suspect or has information about the shooting is asked to call Crime Stoppers at 404-577-8477. Investigators said there is a $2,000 reward for information leading to the arrest of the suspect.

A Splash of Milk in Coffee May Have Health Benefits We Didn’t Know About : ScienceAlert
Super-Rare Star System Is a Giant Cosmic Accident Waiting to Happen : ScienceAlert
No One Likes Commutes, But They May Actually Be Good For Mental Health, Study Finds : ScienceAlert
More Life Than We Ever Realized Could Survive in The Deep Dark of The Ocean : ScienceAlert
A Lost Interview With The ‘Father of The Big Bang’ Was Just Discovered : ScienceAlert