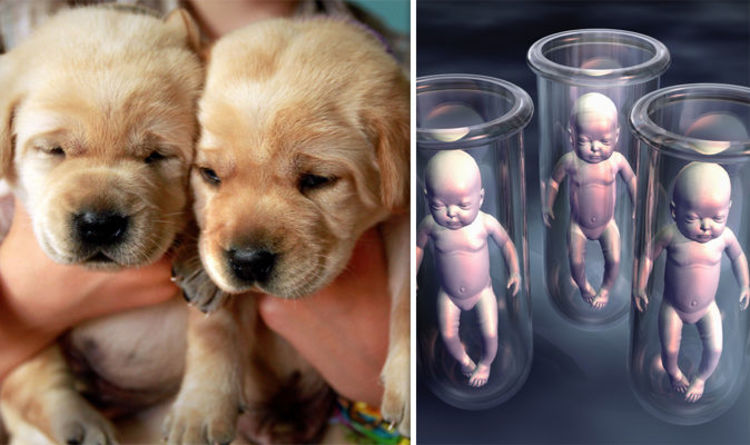 
Chinese media is reporting a laboratory-created offspring of a 12-year old schnauzer has become the latest pup to be cloned in China.

The process involved taking skin samples from the adult dog and cloning the cells.

Wang Yinqing, who is the dog’s owner, showed the young puppy to its ‘father clone’ Doudou in an image uploaded to social media.

The first cloned dog in China was successfully ‘created’ in 2017 and the controversial practice has made huge strides since.

Since March of this year, cloning technology has now allowed Chinese experts to replicate 20 different breeds of dogs in the lab.

But researchers state that while cloning produces the animal of the exact same DNA, it will not necessarily have the same temperament – this is down to its upbringing.

Now it would seem that cloning humans will be the next step, allowing parents to pick and choose traits of their potential children.

Ronald Green, a bioethicist at Dartmouth previously warned: “For example, it could open the door for cloning people who may not have given their consent.

“A woman might want to have George Clooney’s baby and his hairdresser could start selling his hair follicles online. So we suddenly could see many, many progenies of George Clooney without his consent.”

The initial eggs could not be grown into human babies as they were too immature, but the experiment is certainly a massive stride towards cloning of people.

Scientist Hank Greely, a bioethicist at Stanford said, “If we can make human eggs and sperm from skin cells it opens up an enormous number of possibilities for changing how humans reproduce.

“For example, easy access to eggs might mean it would become routine to scan the DNA of embryos before anyone tries to have a baby.

“Doing genetic testing basically on a large chunk of every generation of babies before they even become foetuses – while they’re still embryos – and having parents and potentially governments pick and chose which embryos go on to become babies. That has lots of implications.”

Alzheimer’s Gene Doesn’t Guarantee Dementia. Here’s What You Can Do to Reduce Risk : ScienceAlert
These Mysterious Fungi Belong to an Entirely New Branch on The Tree of Life : ScienceAlert
Octopus Brains Evolved to Share a Surprising Trait in With Our Brains : ScienceAlert
Scientists Revived Ancient ‘Zombie Viruses’ Frozen For Eons in Siberia : ScienceAlert
Study Attempts to Unravel The Best Ratio of Land to Ocean For Exoplanet Habitability : ScienceAlert