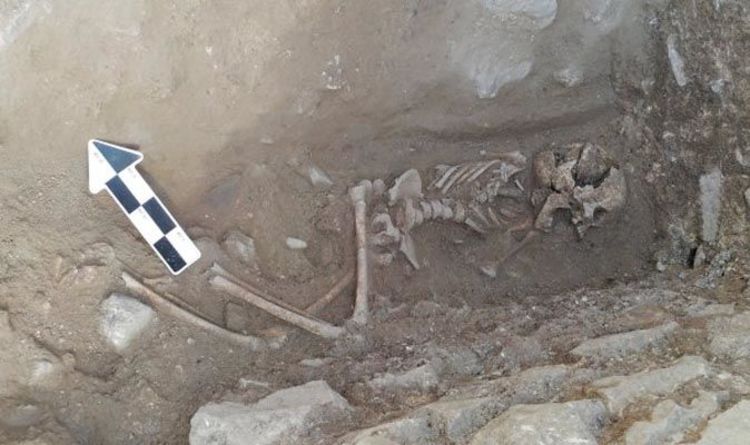 
The grave dates back to around 500 AD and inside is a child of around 10 years old who had been subjected to a gruesome end.

It is not known whether the child was a boy or a girl – further DNA tests will show this – but experts have been able to piece together the infant’s last moments.

Placed inside the mouth of the child was a large stone, which the experts believe the locals thought would stop the child from rising.

However, tooth marks on the stone indicate that the child may have been alive when it was buried.

Archaeologist David Soren of the University of Arizona (UA) said: “I’ve never seen anything like it. It’s extremely eerie and weird.

“Locally, they’re calling it the ‘Vampire of Lugnano.’”

The child was buried in the Italian region of Umbria, where Dr Soren has overseen archaeological excavations since 1987.

The shocking discovery was made inside the La Necropoli dei Bambini, or the Cemetery of the Babies which dates back to the fifth century.

At the time, there was a huge outbreak of Malaria which was wiping out swathes of the population.

As so many people were dying, a cemetery was set up just for the burial of children.

Romans were in control of the area at the time and Dr Sovren believes they were responsible for keeping evil at bay, which explains the stone in the child’s mouth.

He said: “We know that the Romans were very much concerned with this and would even go to the extent of employing witchcraft to keep the evil – whatever is contaminating the body – from coming out.”

The evil in this case, according to bioarcheologist Jordan Wilson, a UA doctoral student in anthropology, was Malaria.

Mr Wilson said: “This is a very unusual mortuary treatment that you see in various forms in different cultures, especially in the Roman world, that could indicate there was a fear that this person might come back from the dead and try to spread disease to the living.

“It’s a very human thing to have complicated feelings about the dead and wonder if that’s really the end.

“Anytime you can look at burials, they’re significant because they provide a window into ancient minds. We have a saying in bioarchaeology: ‘The dead don’t bury themselves.’

“We can tell a lot about people’s beliefs and hopes and by the way they treat the dead.”