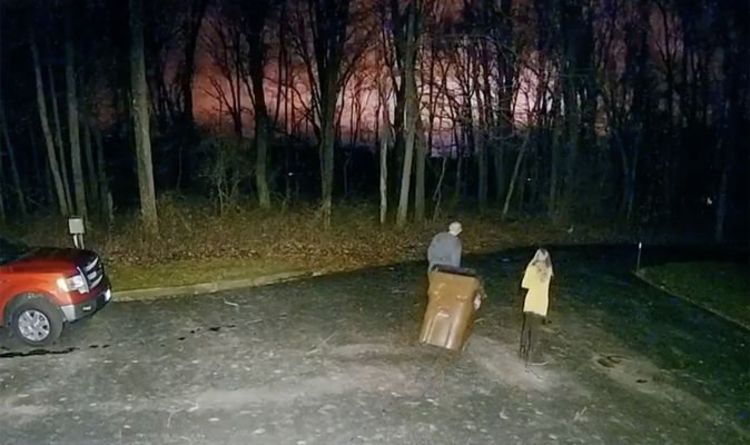 
Terrifying footage of mysterious orange and red flashes that lit up the midnight sky in Ohio has sparked widespread alarm. Hundreds of people witnessed the bizarre flashes of light, and called up the police out of fear. However, experts have still struggled to explain the phenomenon that took place last Sunday, as one witness suspects the US military were involved.

In one video, captured by a Ring CCTV camera, a dad and daughter can be seen walking out their bin at their home in Bethel, Ohio when the flashes appear above them.

The pair immediately stop and stare at the lights covering the entire sky.

Later speaking to Fox19, the dad, Tim Walker said: “I didn’t notice it at first, but we started walking, she was like, ‘Dad! Look at the light in the sky! What is that?’

“And if you actually see the video, I stop and actually set the trashcan down, and I’m like, ‘What is that?’”

Wilwerth can be heard saying: “I have never seen anything like this before. What is that?”

Witnesses report that the bright lights were not accompanied by any sound.

Mr Walker added: “In the video, you’ll see it slowly, slowly, and then it gets really bright like dusk or a firework or lightning in the background.

An AI Found an Unknown ‘Ghost’ Ancestor in The Human Genome : ScienceAlert
Forests at Risk of Burning an Extra 30 Days a Year Without Climate Action : ScienceAlert
Mars Once Had So Much Water, It Could Have Been An Ocean World, Scientists Say : ScienceAlert
These Mysterious Fungi Belong to an Entirely New Branch on The Tree of Life : ScienceAlert
Mummies With Golden Tongues Discovered in Ancient Egyptian Necropolis : ScienceAlert