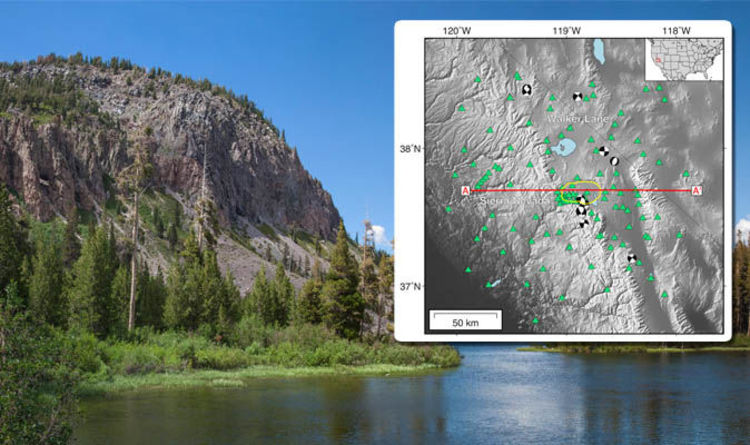 
The 20-mile long Long Valley Caldera in eastern California is one of the world’s largest volcanic calderas.

The supervolcano measures approximately 10 miles in width and is up to 3,000 ft deep.

But very few people know about this supervolcano east of the central Sierra Nevada Range, making it a potentially greater threat than Yellowstone volcano.

And a study published this August in the science journal GeoScienceWorld, has found evidence of ground deformation at the supervolcano.

Geologists who led the study found “ongoing uplift suggests new magma may have intruded into the reservoir” since at least 1978.

The uplift could be evidence of moving molten rock or the crystallisation of material deep beneath the ground.

The study reads: “Despite 40 years of diverse investigations, the presence of large volumes of melt in Long Valley’s magma reservoir remain unresolved.”

About 27 percent of this melt could be hot enough to be scorching liquid rock.

According to the United States Geological Survey (USGS), Long Valley last erupted about 100,000 years ago.

Today, the caldera is “thermally active” with a number of hot springs and fumaroles dotting its landscape much like Yellowstone.

But the comparisons to Yellowstone volcano do not stop there because Long Valley could potentially be as devastating if it were to erupt.

Yellowstone’s last caldera-forming eruption tore through the US some 640,000 years ago.

But there is no way for USGS scientists to predict whether such an eruption will occur again in the future.

For now, the odds of the California supervolcano erupting appear to be less than one percent per year.

The USGS said: “Increased volcanic unrest including earthquake swarms, ground deformation, and CO2 gas emissions in the Long Valley area since 1980 increases the chance of an eruption occurring in the near future, but scientists still lack adequate data to reliably calculate by how much.

“Volcanic unrest in some other large volcanic systems has persisted for decades or even centuries without leading to an eruption.

“But since volcanic unrest can escalate to an eruption quickly – in a few weeks, days, or less – USGS scientists are monitoring the activity closely.”

The USGS scientists said the odds of Long Valley blowing up are roughly equivalent to the yearly odds of a magnitude 8 earthquake striking along the San Andreas fault line in California.

Long Valley is one of the three supervolcanoes in North America alongside Yellowstone and Valles Caldera in Mexico.