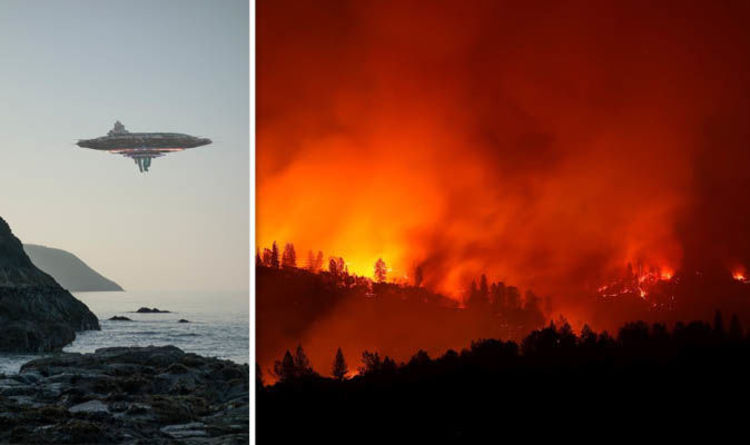 
The two raging infernos – known as the Camp (or Paradise) Fire and Woolsey Fire, have killed 63 people, and 630 remain unaccounted for. Entire neighbourhoods have been reduced to rubble, with some 12,000 homes destroyed. And, frustratingly for locals and authorities alike, the cause of these killer fires is still unknown.

Without a clear scapegoat for the wildfires, the internet has gone into overdrive with conspiracy theories.

One of the most popular is that the trigger for the mammoth blazes was targeted lasers.

These huge lasers, the theory claims, are likely to have been operated by a sinister source.

Most likely, they claim, is a terrorist organisation, or aliens, or the United States government itself.

Some theories go even further, calling the lasers “directed energy weapons,” or DEWs.

DEWs are said to be government-directed lasers which are targeted on the location of choice (in this case, drought-struck California) from a drone or plane.

The theories don’t go so far as to say why the government might be shooting California with lasers, but the opportunity for speculation is rife.

Another popular theory is that these brutal fires were started but clandestine groups, such as the Illuminati or the New World Order.

They may have done this either as a show of force or in an effort to distract the mainstream media.

Some theories combine these two, claiming the Illuminati are the ones behind the lasers.

But, while these conspiracy theories might provide some relief to the frustration of not knowing the cause – or the possibility they may just be a horrible accident – the real cause is still under investigation.

The California Department of Forestry and Fire Protection (Cal Fire) cites the cause of both the Camp and Woolsey fires as “under investigation.”

One theory, which is more plausible than the above yet no less shocking, is that the Camp Fire (the more deadly of the two) was started by downed power lines at the PG&E power plant.

Local news outlets reported some power lines were downed amid high winds just before the fire was called in on November 8.

At about 6.30am local time on November 8, fire crews were dispatched to a vegetation fire “under the high tension power lines.”

One firefighter allegedly told his dispatch unit: “We’ve got eyes on the vegetation fire.

PG&E announced two days earlier that it might shut down power to parts of Butte County amid forecasts of high wind and low humidity, but it never did.

The utility has been criticised and sued in a number of other large and deadly fires across California in the past.

On June 19, 1997, a Nevada County jury in Nevada City found PG&E guilty of “a pattern of tree-trimming violations that sparked a devastating 1994 wildfire in the Sierra.”

PG&E was convicted of 739 counts of criminal negligence for failing to trim trees near its power lines—the biggest criminal conviction ever against the state’s largest utility.

In October 2017, Cal Fire declared PG&E was responsible for their own lines and poles starting twelve separate fires of the 250 that devastated Northern California.

Millions of ‘Silent Synapses’ Could Be The Key to Lifelong Learning : ScienceAlert
These Mysterious Fungi Belong to an Entirely New Branch on The Tree of Life : ScienceAlert
Crocodiles Seem to Be Thriving in a Toxic River That’s More Like a Sewer. Here’s Why : ScienceAlert
Earth’s Oxygen Came From an Unexpectedly Deep And Hot Source, Study Suggests : ScienceAlert
We May Finally Know How Lightning Gets Its Zigzag Shape : ScienceAlert