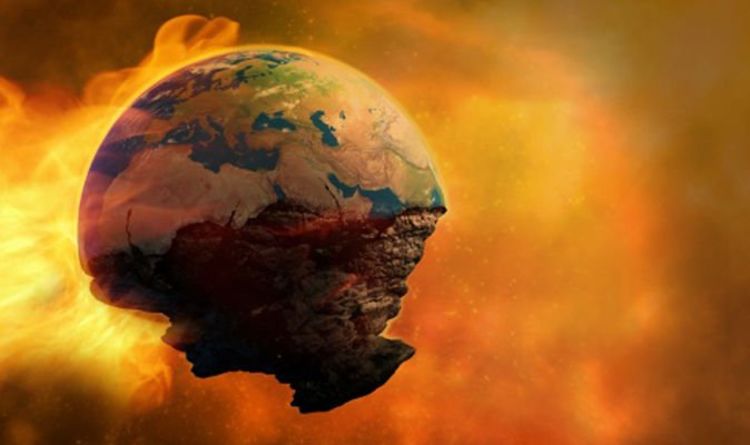 
Blood moons occur during total lunar eclipses, when the Earth lines up between the Moon and the Sun, casting the Moon in near shadow. The only light that then hits our celestial satellite’s surface arrives from the edges of the our atmosphere. The remaining light reflects an eerie red glow onto the Blood Moon’s surface – a phenomena that some believe heralds the end of times.

On Monday, January 21 a Blood Moon coincides with a Supermoon – making it a Super Blood Moon.

And controversial American Pastor Begley believes key Biblical passages confirm this Super Blood Moon means the end of the world is nigh.

The passage reads: “The sun shall be turned into darkness, and the moon into blood, before the great and terrible day of the Lord come.”

And Pastor Begley points to another “ominous” message in the Book of Revelation 6:12.

This states: “And I beheld when he had opened the sixth seal, and lo, there was a great earthquake, and the sun became black as sackcloth of hair, and the moon became as blood.”

Also in Acts 2:20: “The sun shall be turned into darkness, and the moon into blood, before the great and notable day of the Lord come.”

Pastor Begley said: “Is this an omen?

“Is this a sign of things that will happen in those following two years?

The evangelical preacher from Indiana added “the heavens are already shaking” and the “coming of the Lord is fast approaching.”

And though pastor Begley refused to say categorically the world will burn in hellfire within a month, he suggested this is a possible outcome of the Blood Moon.

How will the Blood Moon affect the Earth?

Lunar eclipses, such as the Blood Moon, find the Sun and Moon at opposite sides of the Earth, putting the three astronomical bodies in the same orientation.

When the sun and moon line up, it combines their gravitational pulls on the Earth’s seas.

Additionally the moon is at perigee – the closest approach to the Earth – magnifying its gravitational pull and making tides more extreme.

These Perigean Spring Tides occur around three or four annually.

When is the next Blood Moon?

The next Blood Moon occurs this coming Monday, January 21 and will be visible in the very early hours of the morning.

A Royal Museums Greenwich spokesperson said: “On 21 January 2019 a total lunar eclipse will be visible over most of North America, South America and parts of west and north Europe.

“The rest of Europe and African can witness the end of the eclipse.”

The spokesperson added: “During a total lunar eclipse, the Moon usually turns a deep, dark red because it is illuminated by light that has passed through the Earth’s atmosphere and has been bent back towards the Moon by refraction.”

Engineers Propose an Ambitious Plan to Bury Excess Carbon at The Bottom of The Ocean : ScienceAlert
Mummies With Golden Tongues Discovered in Ancient Egyptian Necropolis : ScienceAlert
Mars Once Had So Much Water, It Could Have Been An Ocean World, Scientists Say : ScienceAlert
A Tobacco Plant Has Been Engineered to Produce Cocaine in Its Leaves : ScienceAlert
Oldest Known Dog Bone Hints Our Best Friends Were With Us Earlier Than Thought : ScienceAlert