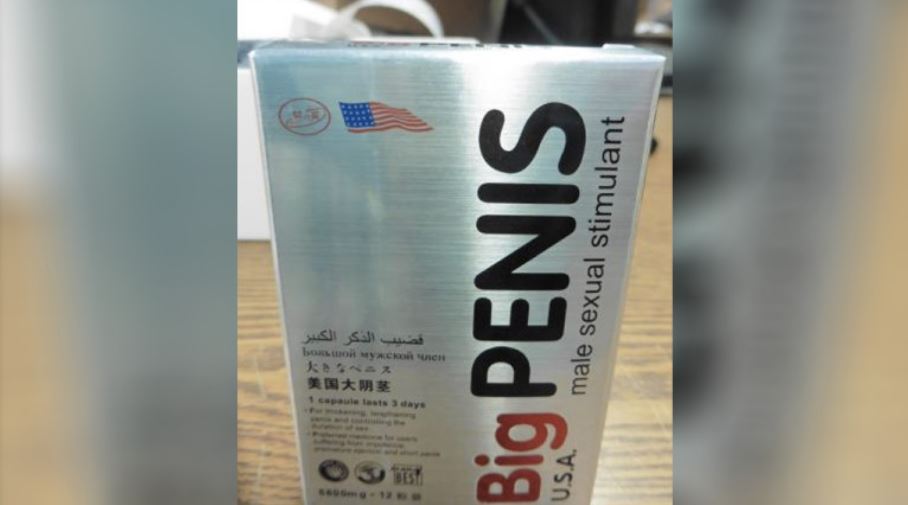 
If you use a supplement called Big Penis, you should know that it contains an unexpected ingredient.

“The Food and Drug Administration is advising consumers not to purchase or use Big Penis, a product promoted for sexual enhancement,” the agency wrote.

Big Penis (a.k.a. Big Penis USA) is a “male sexual stimulant,” according to packaging. The FDA operates several International Mail Facilities around the U.S., monitoring incoming packages for illegal, unapproved, and counterfeit drugs, and found Big Penis at one of the facilities. A laboratory test confirmed that it contained sildenafil, a drug regulated by the FDA.

But the big problem for Big Penis is that the box doesn’t declare that it contains the prescription drug, and that’s a violation of food and drug laws in several countries, including Australia.

Problems with Sildenafil and supplements

Accidentally taking sildenafil, even if you were hoping for Big Penis’ eponymous effects, can be dangerous. The drug can interact with other prescription drugs taken by people with high blood pressure and diabetes and can dangerously lower blood pressure. And there are other negative effects of taking too much sildenafil: One man’s vision turned permanently red-tinted after a sildenafil overdose.

Big Penis is just one of dozens of sexual enhancement pills marketed as dietary supplements that the FDA has found to contain regulated ingredients. The fact of the matter is, there are lots of issues with the supplement industry and how it’s policed globally.

Supplements often contain prescription drugs or untested and even illegal chemicals. A 1994 law puts the onus on the FDA to prove that a supplement is unsafe, making it difficult to stop illegal supplements before they hit the shelves.

This isn’t Big Penis’ first run-in with authorities, either. Last year, the Australian government’s Therapeutic Goods Administration also found that the tablets contained sildenafil, as well as an antibiotic called chloramphenicoll, both of which require prescriptions in Australia. The TGA teamed up with the Australian Border Force to stop the drug from entering Australia.

The FDA keeps a database of “tainted” supplements to keep an eye out for, many of which are sexual enhancement or weight loss supplements.

And, according to an FDA statement, “Consumers should also be on alert for products that offer immediate or quick results and that sound too good to be true.”

That’s true in general. Always talk to your healthcare practitioner first if you’re thinking about using a new dietary supplement.

Betelgeuse Just Keeps Getting Dimmer, And We Have No Idea Why
Two Satellites Might Collide in Earth Orbit This Week. Here’s Why That’s a Problem
Rapid Evolution Made These Paper Wasps Capable of Recognising Each Other’s Faces
Life’s First Genes May Have Contained a Nucleic Acid You’ve Probably Never Heard Of
Scientists Have Grown Snake Venom Glands in The Lab. Here’s Why That’s Awesome