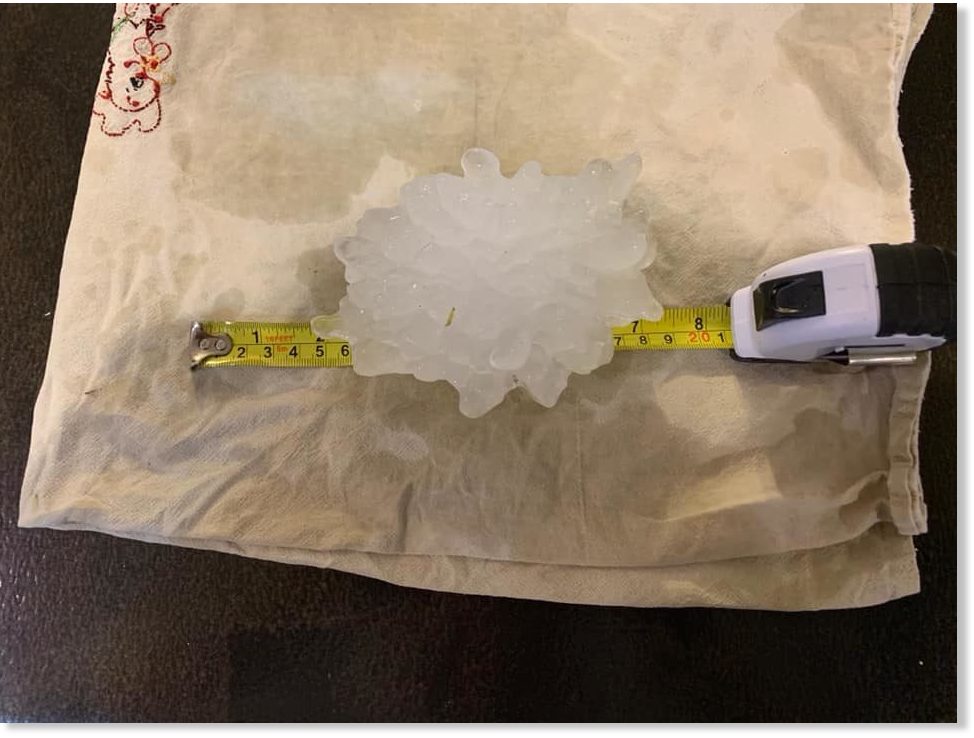 Monster hail fell from the sky and hammered areas of the central United States on Tuesday, shattering a state record. Earlier on Tuesday before the storms developed, AccuWeather Extreme Meteorologist Reed Timmer warned that Colorado’s state hail record could be in jeopardy given the intensity of the storms that he saw developing.

His prediction came to fruition on Tuesday afternoon when a hailstone with a maximum diameter of 4.83″ fell in Bethune, Colorado, on Tuesday afternoon. The record was confirmed on Wednesday evening by the Colorado Climate Center and the National Weather Service office in Goodland, Kansas. The previous state record in Colorado was 4.5 inches.

As the Colorado Climate Center said on Twitter, photos indicate that the stone could have been even larger than recorded due to the time in between its falling and when it was put in the freezer.

The weight of the record-breaking hailstone came in at 8.5 ounces. 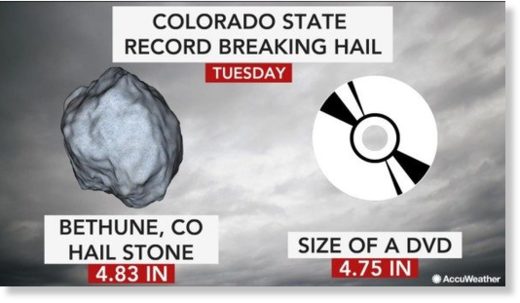 A dramatic video posted on social media captures one truck driver in an intense hailstorm in Frederick, Colorado, on Tuesday night. The truck driver, Brittney Richardson, expressed concern while in the back of her truck cabin.

“I heard kind of a bang and I thought somebody hit the truck,” Richardson said. “The truck started rocking and we have large hail coming down.”

As Richardson narrates the video, large thuds can be heard in the background. She feared the truck would be “totaled” by the large hail and told Storyful the experience was “absolutely terrifying.”

Richardson has been driving a semi-truck around the nation for seven years, documenting her travels on her Facebook page, “Brittney in Pink”.

Timmer was staked out in far northeastern Colorado to monitor the storms. He reports that the area experienced a “perfect combination of wind shear, low-level moisture and mid-level dry air” to stir up some strong severe storms.

The main storm in question developed in the High Plains near Bethune on Tuesday in the afternoon with a report of hailstones in excess of 5 inches in diameter, which would be similar to pirate ship cannonball-sized, at 3:35 p.m. MT, according to AccuWeather Senior Storm Warning Meteorologist Eddie Walker.