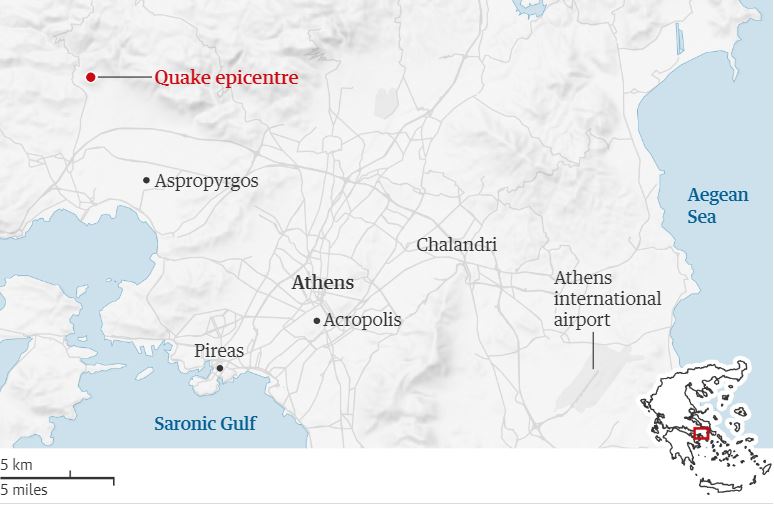 
A strong M5.3 earthquake has struck near Athens, causing residents of the Greek capital to run into the streets on July 19, 2019.

No immediate news on injuries or damage after 5.3-magnitude quake rattles southern Greece. More than 400 people have reported shaking on the USGS website.

The institute said the quake struck at 2.13pm local time, about 14 miles (23 km) north of Athens.

#BREAKING: A powerful earthquake has hit near the capital city of Athens, Greece. The @USGS said it was 5.3 magnitude. The shaking knocked out power and sent some residents running into the streets. pic.twitter.com/2wLLYxhIPH

Residents said the quake was strong but short, describing televisions shaking and objects falling from bookshelves.

The quake caused limited power cuts and communication problems around the capital. The fire brigade received calls about people trapped in lifts.

The quake, which was caught live in the studios of the state broadcaster, ERT, caused damage to the bell tower of the Pantanassa church in Monastiraki Square in Athens.

The Civil Protection Authority said there was no immediate word on injuries or large damage.

DAMAGE: Photos of damage coming in following the 5.1 earthquake near #Athens #Greece . Officials are telling everyone to remain calm as people are flooding the streets, away from buildings. #earthquake @ABC pic.twitter.com/7EZyKltA9N

Gerasimos Papadopoulos, a senior seismologist at the Geodynamics Institute, said Friday’s quake was felt across southern Greece. “It had a very shallow depth and that’s why it was felt so strongly,” he said.

“It is too early to say whether this was the main earthquake, but there have been aftershocks of magnitude 3.5, 2.5 and 3.2 – and that is encouraging. But we need more time and data to have a clear picture.”

The most powerful quake to hit Athens in the past 20 years occurred in 1999, when a 6.0-magnitude temblor caused extensive damage and killed more than 140 people.

Always be ready for an earthquake in your area.

This Species of Carnivorous Plant Evolved Into a Toilet And Is Now Winning at Life : ScienceAlert
This Physicist Says Electrons Spin in Quantum Physics After All. Here’s Why : ScienceAlert
Dogs Can Be Aggressive For Lots of Reasons, And One of Them Is You : ScienceAlert
Scientists Have a Plan to Turn Earth Into a Giant Observatory : ScienceAlert
Viagra Linked to Much Lower Risk of Death in Men, But Questions Remain : ScienceAlert