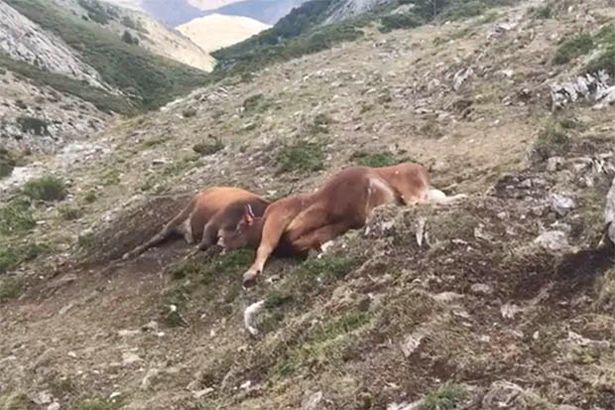 
Something in the sky is making lightnings more deadlier than ever!

At least 500 animals were reportedly within the last two days in Nepal, India and Spain.

Lightning killed at least 200 sheep in Himachal Pradesh’s Rohru area on August 30, 2019. The shepherds were camping outdoor when lightning struck them.

They have asked the government to be compensated in some way for the loss. The state has been experiencing dry weather in most parts while some areas have had thunderstorms… Deadly lightning storms. – SunPost

Heavy snowfalls and lightning had already killed hundreds of sheep last winter, which is a major source of income in the area.

Now, the farmers are in great distress for their livelihood. – Nepal 24 hours

This is the distressing moment a farmer discovered his 20 cows dead after they had apparently been struck by lightning – freezing their blood in the process.

The gruesome deaths are thought to have happened during a thunderstorm on the Geras Mountain in the Spanish municipality of Geras de Gordon. The farmer had reportedly rented the whole mountain so the cattle could graze.

But – despite the height at which they were living – neighbours claimed it is uncommon for lightning to strike cattle. – DailyStar

It’s maybe rare for animals to be killed by lightning, but it is horrifying and life-changing for farmers experiencing it.

‘Funky Worm’ Fossil Helps Explain The Mysterious Origins of Amphibians : ScienceAlert
Scans of Mummified ‘Golden Boy’ Reveal He Was Covered in Magical Protections : ScienceAlert
Babies May Not Be Born With a Microbiome After All, Scientists Say : ScienceAlert
Hypertension Drug Shown to Extend Lifespan And Slow Aging in Animals : ScienceAlert
This Species of Carnivorous Plant Evolved Into a Toilet And Is Now Winning at Life : ScienceAlert