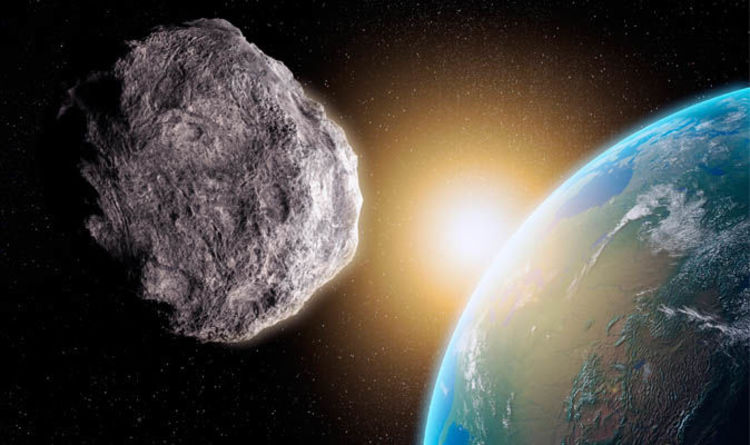 
The space rock dubbed Asteroid 2018 NM will skim past the planet in the early morning hours of Tuesday, July 17.

The asteroid is currently speeding towards our planet at breakneck speeds of 6.7 kilometres per second or 14,987mph.

If it were to hit, an asteroid impact of this size could cause grave damage.

Asteroid NM 2018 is estimated to be about 62 feet (19m) in size or the equivalent of two London red buses.

Thankfully even at its closest approach to the planet the asteroid will be more than the distance of the moon from Earth.

At its closest minimum distance the asteroid might approach within 332,608 miles of the planet.

The NASA ephemeris map above shows the asteroid’s orbital path past the Earth and the moon.

The asteroid will sling by the planet tomorrow and continue on its journey around the solar system past the orbit of Mars.

According to NASA, the last time the asteroid approached the Earth this closely was on the afternoon of July 13, 1983.

Asteroid 2018 NM is just one of around 11 asteroids to approach the planet this July.

But only one of the asteroids is large enough to raise alarm bells at NASA or be classified as a Potentially Hazardous Asteroid (PHA).

Towards the start of September at least two more asteroids measuring than 328 feet inside will make a flyby but will be too far out to cause any concern.

Bitcoin’s Climate Impact Is Bigger Than Beef Farming – And It’s Only Getting Worse : ScienceAlert
Long COVID Is Still Raising More Questions Than Answers, Say Researchers : ScienceAlert
It Turns Out There Is Such a Thing as Good Gossip, According to New Research : ScienceAlert
Hubble And Webb Pics Reveal DART Impact Was Even Bigger Than Expected : ScienceAlert
Astronomers Think They Know The Reason For Uranus’s Kooky Off-Kilter Axis : ScienceAlert