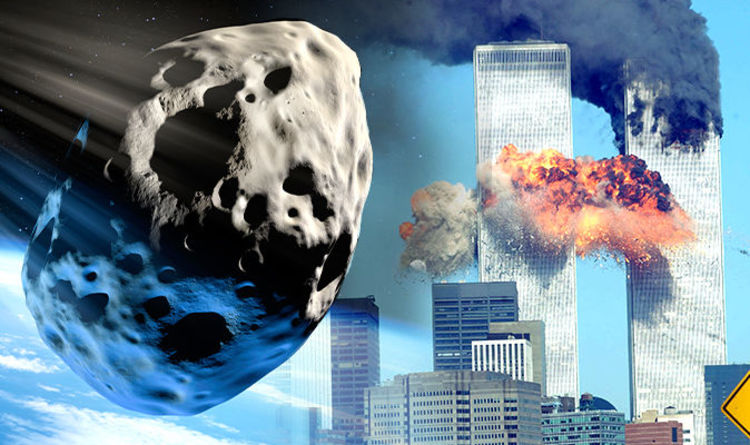 
In an eerie coincidence, Asteroid Bennu was discovered on September 11 – the same day the iconic structures were razed in an Al-Qaeda-inspsired terrorist attack.

The asteroid, formally designated as 101955 Bennu, is blasting through space at 63,000 miles per hour and experts have warned of “dire” consequences if the 79 billion kilogram rock smashes into our planet.

The astronomers who identified Bennu in 1999 estimated the freezing sphere of rock has a diameter of around 492 meters, making it extremely similar in size to the original World Trade Centre’s North and South Towers.

Despite weighing in at the equivalent of 1,664 times as heavy as the Titanic, the asteroid is relatively small size in celestial terms.

But the speed at which the Bennu is travelling, if it were to collide with the earth, could cause untold damage.

Fortunately, the chances of the rock actually impacting with our planet are relatively slim, with experts estimating a 1 in 2,700 chance of Bennu hitting earth on September 25, 2135.

However less likely occurrences have come to pass, with punters initially being offered 5000 to 1 odds on newly-promoted Leicester City being crowned champions of the UK’s Premier League – a competition they defied all expectations to eventually win.

If Bennu does find itself on a collision course with Earth, NASA has warned there is little that could be done to prevent the impact.

The space agency is experimenting with a range of high-tech anti-asteroid craft designed to prevent a collision.

Experts hope their Hypervelocity Asteroid Mitigation Mission for Emergency Response craft will either act as as battering ram to shunt incoming asteroids off course, or blast them into pieces using nuclear weapons.

But the size of Bennu has ruled out the first option, and the prospect of obliterating it with nukes would send radioactive debris and smaller chunks of rock showering to Earth.

The asteroid responsible for the extension of the dinosaurs which smashed into the earth some 65 million years ago was far bigger than 101955 Bennu.

But its impact prompted a nuclear winter which blocked out the sun and caused temperatures to plummet for decades.

While Bennu would unlikely cause damage on such a massive scale, it would still have the potential to unleash the power of 1,200 megatons of energy on impact – 80,000 times that of the nuclear bomb which was dropped on Hiroshima.

Kirsten Howley, a physicist at Lawrence Livermore National Laboratory has coauthored a report on the potentially catastrophic results of an impact.

She said: “The chance of an impact appears slim now, but the consequences would be dire.

No One Likes Commutes, But They May Actually Be Good For Mental Health, Study Finds : ScienceAlert
Super-Rare Star System Is a Giant Cosmic Accident Waiting to Happen : ScienceAlert
Bigfoot Has a Very Simple Explanation, Scientist Says : ScienceAlert
AI Predicts We’ll Breach Our Climate Goal in Just 10 Years : ScienceAlert
Orcas Are Contaminated With a Forever Chemical Associated With an Unlikely Product : ScienceAlert