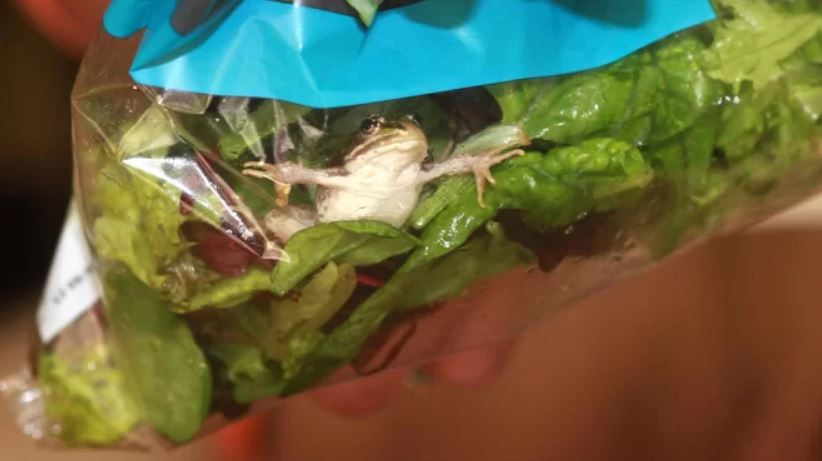 
Prepackages salads aren’t healthy. They are packed along with a mixture of gasses known as modified atmosphere and many contain very little nutrition due to the processing.

These strange animal discoveries have been compiled in a new scientific study. From 2003 to now, the scientists gathered more than 40 examples of animals found in pre-bagged salads in 20 US states. And from these 40 cases, 38 of these encounters took place during the past decade.

Are we doing something wrong?

Only incidents covered by news outlets were taken into account in order to have precise data on where, when, what, who, etc… For the dead animals, the scientists recorded whether the animal was whole or partial.

Of the animals found in salad (3x times more common in bags of conventional vegetables than in organic greens):

Rodents and bats received significantly more media attention than other animals, likely because they are known vectors for many diseases that affect people.

But I mean, if this study has only taken into account the incidents reported in the news, it is very probable that wildlife ends up more frequently in pre-washed salads than then research suggests.

It remains unclear whether these occurrences indicate a food-safety crisis or a complaint against food quality. I would say those results represent another evidence that we should stop eating pre-packaged salads.

Our Body Temps Have Been Dropping For 160 Years. Gut Microbes May Be Playing a Role : ScienceAlert
Lightning Strikes Create a Strange Form of Crystal Rarely Seen in Nature : ScienceAlert
Study of 500,000 Medical Records Links Viruses to Alzheimer’s Again And Again : ScienceAlert
This Physicist Says Electrons Spin in Quantum Physics After All. Here’s Why : ScienceAlert
Scientists Reveal The Most Distant Galaxy We’ve Ever Found : ScienceAlert