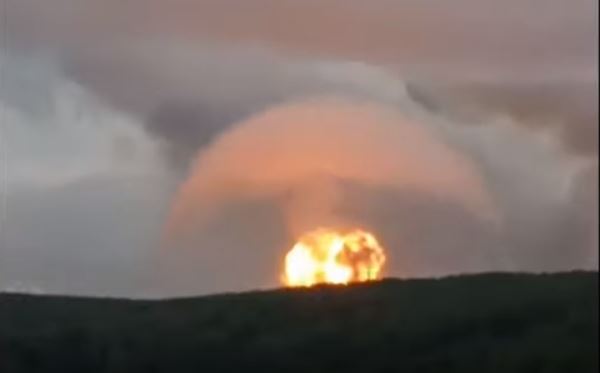 
At least eight people were injured and one killed after explosions destroyed an artillery warehouse near the town of Achinsk in the Siberian region of Kraskoyarsk on August 5, 2019.

The fire continued to rip through the ammunition depot, lighting up the evening sky, as plumes of smoke billowed from the warehouse.

According to Russia’s Ministry of Emergency Situations (EMERCOM), some 1,000 residents living within a 20-kilometre radius of the base were told to evacuate.

Krasnoyarsk authorities have offered assistance in relocating the evacuated people.

According to preliminary information, the fire is thought to have occurred after a shell detonated in the warehouse.

Over 40,000 shells are stored in the ammunition depot, military officials said.

Well, probably not anymore. By the way, I love the fireworks on the 4th of July!