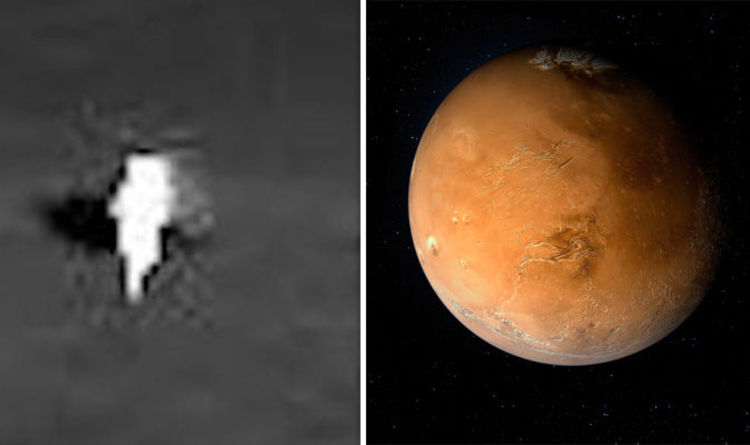 
A strange bright light was spotted by NASA’s Martian rover which was quickly picked up upon by conspiracy theorists.

As the rover moves past the light figure, it seemingly stays in the same place which would suggest it is not a glitch on the camera.

Popular UFO blog UFO Sightings Daily theorises that NASA  did see the odd entity, but decided against moving the Rover near to it as it might destroy the machine.

An article on the blog reads: “I found an energy being on Mars near the NASA rover.

“The rover took three photos of this being as it was moving past. The being is pure white light.

“I thought maybe this was a reflection, but how? It is an overcast sky.

“Then I thought it might be gamma radiation hitting the surface of the planet, but three times in a few hours?

“That is like the same guy winning the mega lottery in the same day, the odds are way out there.

“So this object had to have come into the photo, had its own light source and lingered for a while while changing shape as the photos attest: It’s alive!

“So why didn’t NASA go to investigate? Fear of what its close proximity to the rover might do, shut it down, cause glitches, take control, etc.”

Some pointed out that it looks like a glitch in NASA’s camera, while others believe it is a trick of the mind.

Pareidolia is a psychological phenomenon when the brain tricks the eyes into seeing familiar objects or shapes in patterns or textures such as a rock surface – and this could be what is happening in this instance.

However, it is not the first time evidence has apparently been found to support the idea of life on Mars.

NASA insisted the rock is just a meteorite impact crater that has been left in the unusual form by later erosion.

“The two odd depressions at the north end of the crater (the ‘eyes’) may have formed by wind or water erosion.”

A Tobacco Plant Has Been Engineered to Produce Cocaine in Its Leaves : ScienceAlert
Giant Asteroid Unleashed a Devastating Martian Megatsunami, Evidence Suggests : ScienceAlert
Cannabis For Pain Relief? Review of 20 Studies Provides Sobering Results : ScienceAlert
We May Finally Know How Lightning Gets Its Zigzag Shape : ScienceAlert
Astronomers Spot The Biggest Galaxy Ever, And The Scale Will Break Your Brain : ScienceAlert