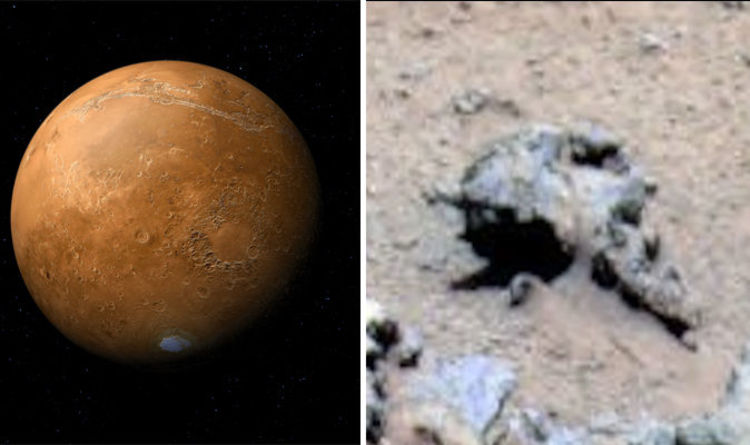 
Alien hunters believe NASA has “missed” evidence there is life on Mars or are trying to conceal the truth.

And in conspiracy theorists think they may have found something they were not meant to when analysing images from NASA’s Martian Rover.

UFO hunters believe they spotted what looks like a skull of an alien being on the Red Planet.

What makes the supposed creature, which is claimed to be a “male warrior”, even more weird is the fact that it appears to have antennae.

Popular conspiracy theory website UFO Sightings Daily says of the finding: “NASA is constantly looking at mathematical measurements, stats, winds speed, surface pressure and hundreds of other stats instead of doing their job, which is discovering and reporting signs of intelligent life.”

The website, run by Scott C Waring, lists what it believes is in the picture: “One is a skull that is broken open at the forehead.

“It has an extended cranium, antenna, eyes, nose, mouth, chin and beard, which seems to depict a male warrior.

However, sceptics and NASA would say the skull and other similar findings are just the effects of pareidolia – a psychological phenomenon when the brain tricks the eyes into seeing familiar objects or shapes in patterns or textures such as a rock surface.

This would mean that the Martian warrior skull could just be a misshapen rock.