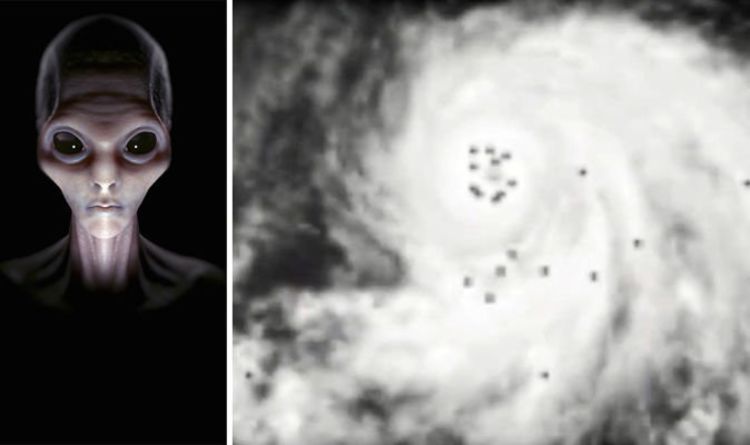 
As a solar eclipse darkened parts of Central and South America on June 2, a hurricane similarly formed over the North Pacific Ocean. To most, the hurricane was particularly insignificant as it struggled to make land, but conspiracy theorists have other ideas. One alien hunter analysed satellite imagery of the hurricane and noticed black dots on the surface of the weather phenomenon.

This instantly led to a bizarre claim that aliens are here on Earth, and not only are they manipulating the planet’s weather system, but also hiding in a base beneath the Pacific Ocean.

The footage was uploaded to YouTube channel MrMBB333 where alien hunter Scott C Waring noticed the strange dots hovering above the hurricane which are supposedly alien spaceships that “all fly into the eye, like going down a drain in a bathroom sink.”

Mr Waring wrote on the blog ET Database: “Its obvious to me that the aliens wanted to fly into an underwater base unnoticed so they created the hurricane in order to fly over it and enter the base undetected.

Now would aliens deliberately create a hurricane and endanger the lives of humans in the process to hide from us? Yes, some species defiantly would do such an thing.

“Not all the aliens care about humans. UFOs have been seen creating clouds, storms, lightning, tornados and even earthquakes.

“UFOs are frequently seen during the most horrific of natural disasters. Which is proof that they created it.

“But here, we have a motive for creating the hurricane for entering an underwater base.”

However, YouTuber MrMBB333 claims the spots were not extraterrestrial, and believes “the dark shadows to be just reflections of shadow from the eclipse.”

For The First Time, Scientists Have Named a Heat Wave. Here’s Why It’s a Big Deal : ScienceAlert
A Nuclear War Could Starve Billions, But One Country May Be Safer Than The Rest : ScienceAlert
Why Do Kids Get Worms, And What Can You Do to Prevent It? : ScienceAlert
‘Extreme Heat Belt’ to Snare 100 Million Americans in Decades, Scientists Warn : ScienceAlert
Jupiter’s Ice Moon Europa Probably Has Upside Down, Underwater Snow : ScienceAlert