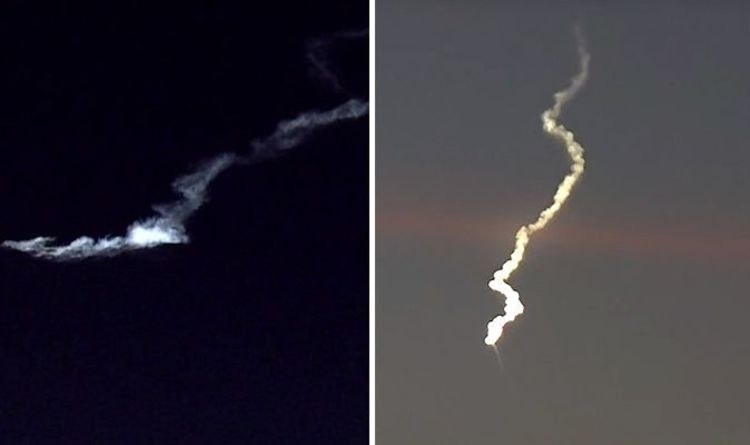 
At around 5:30pm local time residents were left bewildered after an “out of control” light beam was seen “spiralling” through the California night sky. Residents swiftly took to Twitter to find out what they had just witnessed. One person said: “This appears to be from some sort of missile launch.” While several others insisted it was “aliens” or it could even be “Santa”.

Another witness said the object seemed to be “out of control”. He wrote: “I wonder what this was in the sky, some sort of an exhaust trail, like toothpaste against a chalkboard.

“The flying object giving it off was spiralling slowly like it was out of control. The exhaust was extremely bright.”

One person added: “Big explosion of light in the California skies near Sacramento.”

Elizabeth Matuzak told ABC7 News she believed the sighting to be that of a UFO. Ms Matuzak said: “I’m definitely a big believer in UFO phenomenon.”

She added: “I definitely think it’s a UFO.”

Many residents said they believed the light to be from a rocket launch which was planned at Vandenberg Air Force Base near Santa Barbara but later cancelled.

There was also a planned Space X launch which was later called off.

The strange sighting was later confirmed to be a meteor

The Lick Observatory, located at the summit of Mount Hamilton, confirmed the news and said: “A bright meteor was visible in the skies over the Bay Area shortly after sunset this evening, leaving a bright trail that was visible for many minutes in the western sky.”

Around an hour and a half after the strange object was first spotted, the National Weather Service also said that while not confirmed, it appeared to be a meteor.

It wrote on Twitter: “Still not 100% certain, but the evidence is growing the object seen was a meteor.

“A meteor can create a very high-level cloud called a Noctilucent cloud. NASA has a great webpage explaining the cloud formation.”

The National Weather Service also said the object could be “space debris”.