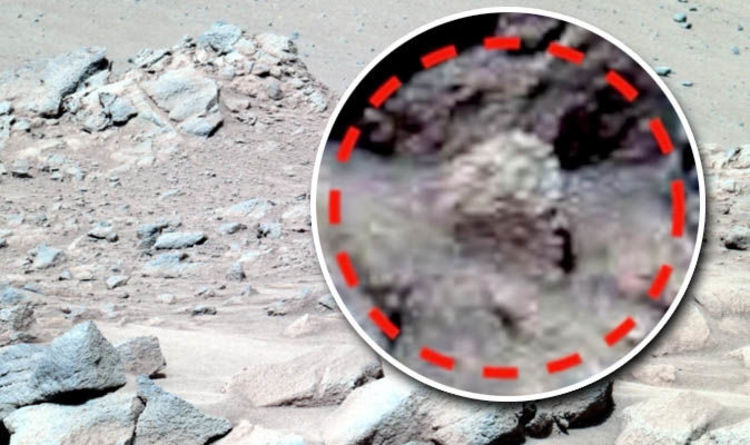 The conspiracy theorist shared stills of the Red Planet, snapped by one of NASA’ robotic rovers, claiming they were proof of aliens.

Pointing towards a photo of a rock, Mr Waring said: “This object does appear to be technology. Can you see the long tunnels coming out of this? The long tube?

“There’s kind of two round, tubular, larger pieces behind it, almost like a vacuum tube.

“And you can see there is a tunnel here going on it and it just looks kind of strange.”

The picture in question was snapped by NASA’s Spirit rover, which has been exploring the surface of Mars since January 2004.

In another section of the NASA photo, Mr Waring claims to have found an alien skull and face.

He said: “This is actually a face on a face. Maybe you get that? Why would they do that?

“They might be a culture that believes this is art – that the most beautiful thing in the world is a face and so maybe they did that.”

“I totally agree with you on what you see. Life has existed on Mars and maybe still does, my own opinion.”

The most likely scenario however, is that Mr Waring has fallen for the effects of Pareidolia – a trick of the mind which causes people to see faces and patterns where they do not exist.