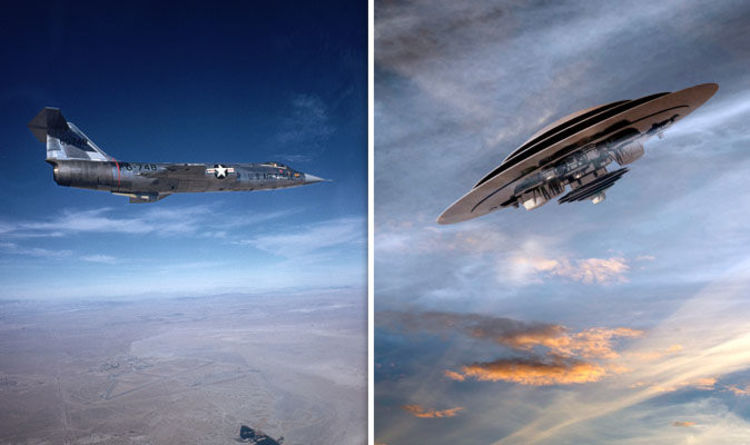 
The pilot, who has chosen to remain anonymous, gave his testimony as part of the Disclose Project – an investigation into the facts behind UFO sightings over the years. Steven Geer, who heads up the research project, has spent years collecting personal accounts and evidence to put together the film “Unacknowledged”. In it, one former US Air Force pilot made a shocking revelation about his apparent first-hand experience while travelling over Germany.

“The plane I was flying in was an F-104, which was the fastest known aircraft at that time,” he revealed.

“We were flying over the Rhine river at high altitude and I spotted a bogie (UFO) at 10 o’clock (northwest).

“I relayed the information and the captain said ‘lets go check it out’.

“We kicked in the afterburner and went after it but it disappeared just like that.

“Afterwards he said ‘whatever you do, please do not say anything about this, it will get me in a lot of trouble’.

“That was my first introduction to the cover-ups.”

The pilot was travelling in a Lockheed F-104 Starfighter – a single-engined, supersonic interceptor aircraft.

Capable of travelling of speeds greater than 1,400mph, the UFO they encountered apparently outran them.

The F-104 set numerous world records, including both airspeed and altitude levels.

However, the plane’s poor safety record thrust it into the public eye, especially in Germany.

The pilot’s revelations come just a day after an Apollo 14 astronaut made a shocking admission about aliens.

Lunar Module Pilot Edgar Mitchell claimed the government was aware of extraterrestrial life and was hiding the truth.

Astronomers See a Star’s Final Scream Into a Black Hole Halfway Across The Universe : ScienceAlert
It Sounds Crazy, But Walking Backwards Is Really, Really Good For You : ScienceAlert
Oldest Known Dog Bone Hints Our Best Friends Were With Us Earlier Than Thought : ScienceAlert
Engineers Propose an Ambitious Plan to Bury Excess Carbon at The Bottom of The Ocean : ScienceAlert
A ‘Wormhole’ Built on a Quantum Computer Teleported Information as Predicted : ScienceAlert