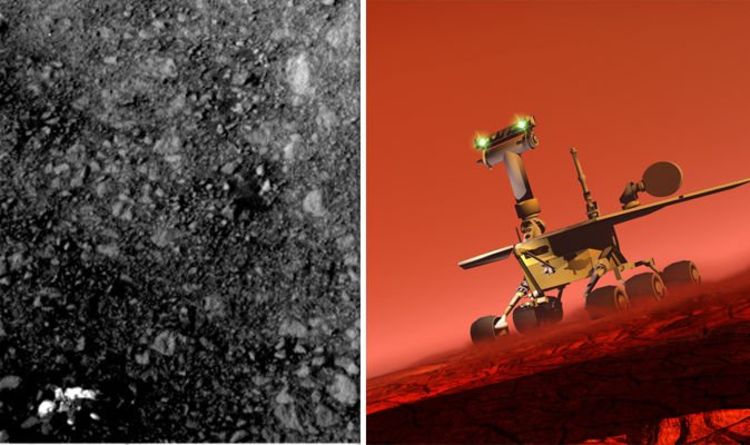 
The Curiosity Rover has been sending back images and information of Mars since 2012, but conspiracy theorists suggest it might not be alone. After looking through some of NASA’s images of the Red Planet, an eagle-eyed conspiracy theorist believes he has spotted and alien robot on Earth’s next door neighbour. If the other ‘probe’ was not sent by aliens to garner information on Mars, then prominent alien hunter Scott C Waring suggests it could equally have been sent by another nation or private company in a top secret mission.

The conspiracy theorist adds that the probe may have been sent by the likes of Elon Musk’s SpaceX to check NASA is reporting everything truthfully.

Either way, Mr Waring believes the new technology he has found is far beyond anything NASA is capable of achieving.

He wrote on his popular blog UFO Sightings Daily: “I just found a mini alien robot wandering around the Mars Curiosity rover.

“This mini robot is shiny metallic and has legs. The object looks like it is clean and stands out.

“So where did it come from and is it really alien at all? It is possible that another nation sent a mini rover to go investigate the NASA craft to make sure they are reporting everything they are supposed to.

“It could be a private company like SpaceX trying to do it in secret so they wont be asked by a foreign country to do it for them too.

“Or it could just be an alien prove that crawls. Whatever it is, it certainly is much smaller than the Curiosity rover – it looks to be only about one foot across.”

Alternatively, it could be NASA’s InSight lander which recently arrived at Mars on November 26 after a seven-month and 300million mile journey.

InSight’s mission is to map the deep interior of Mars and Nasa is also planning a rover mission for 2020, to investigate signs of primitive life they believe exists under the surface.

InSight’s primary instrument is a French-built seismometer, designed to record the slightest vibrations from “marsquakes” and meteor impacts around the planet.

The device, to be placed on the surface by the lander’s robot arm, is so sensitive it can measure a seismic wave just one half the radius of a hydrogen atom.

A second instrument, furnished by Germany’s space agency, consists of a drill to burrow as much as 16feet underground, pulling behind it a rope-like thermal probe to measure heat flowing from inside the planet.