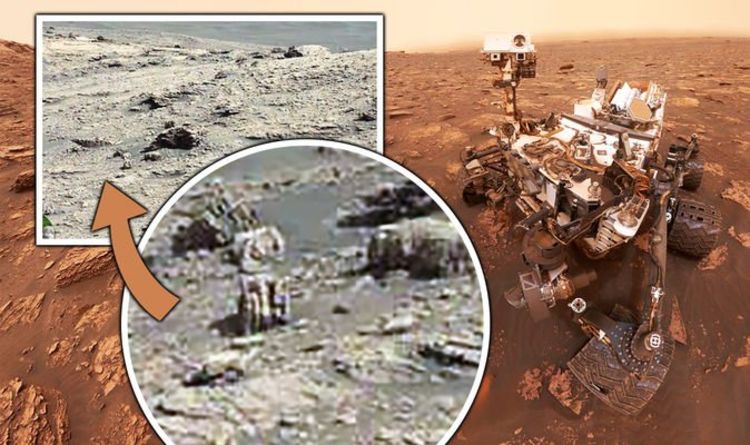 
NASA’s Curiosity Rover has been exploring Mars since it landed inside the Red Planet’s Gale Crater in August 2012. The NASA Mars rover has since then covered 12.99 miles (20.91km) for its primary objective to identify biosignatures of basic molecular life. But an intelligent alien life conspiracy theorist now believes Curiosity has uncovered conclusive photographic proof that technologically advanced alien life once existed on Mars.

Whatsupinthesky27 Youtube channel’s presenter Will claims to have discovered an object resembling part of a statue amongst the desolate Martian landscape.

He said: “What makes this really interesting is you have a connecting block resembling a Rubik’s Cube to its top left.”

He goes on to speculate his latest “find” is yet more evidence of ancient, possibly now extinct, alien activity on Mars.

“This was definitely an area which had water.

“Obviously we know something was on Mars and the Moon.”

He wrote: “The object is a clear indication intelligent beings once thrived on this planet.

“One of the objects has a jar shape that has fallen on its side.

“It not a jar of course, its clear that its more high tech than that with all its pipes and tubes moving down its side.

“It has a lot layers and was obviously some kind of mechanical device.”

Along with pointing out the oddly-shaped anomaly among the Red Planet’s rubble, Whatsupinthesky27 also critiques the apparent blurring of areas in this image and others on Mars.

The YouTube presenter said: “They don’t seem to be here for any reason at all, other than either NASA put them there or Curiosity’s camera just can’t deal with them.

“I have always said, any time you get these straight blur lines, the images appear to have been doctored.

“Every time we see these blur marks, it upsets me, because who knows what was there?

“Squaring off the blocks just doesn’t make any sense to me, unless it occurs automatically.”