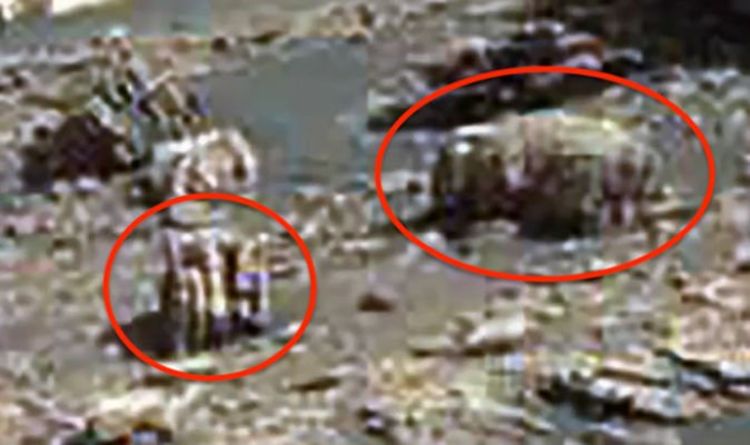 
Alien hunters claim to have found “mechanical devices” on Mars which are “clear indications” that intelligent extraterrestrials live, or lived, there. While browsing NASA images, eagle-eyed conspiracy theorists spotted two strange objects in the dusty terrain. One of the objects looks like a jar which has fallen on its side, but the object also looks as if it has machinery on it. Another of the objects looks similar to a radiator.

Prominent alien hunter Scott C Waring wrote on the blog ET Database: “Here are some cool ancient alien artefacts. The objects are clear indications that intelligent beings once thrived on this planet.

“One of the objects has a jar shape, but is fallen over on its side. It not a jar of course, its clear that its more high tech than that with all its pipes and tubes moving down its side.

“It looks very similar to a lot of jars seen recored from old roman digs. The other object has a lot layers and was obviously some kind of mechanical device.”

Another recent finding was that of a large black rock which was supposedly such strong evidence of alien life that NASA was accused of misleading the public.

Mr Waring wrote on his blog: “While looking at the front page of the Mars Science Laboratory website, I noticed that they placed a photo with a huge black fossil right on the freaking front page!

“How could anyone who has any experience at ancient fossils and artefacts have even possibly have missed that?”

However, sceptics and NASA would say the object and other similar findings are just the effects of pareidolia – a psychological phenomenon when the brain tricks the eyes into seeing familiar objects or shapes in patterns or textures such as a rock surface.

Sword Mistaken For Replica Is Actually An Ancient 3,000-Year-Old Weapon : ScienceAlert
Babies May Not Be Born With a Microbiome After All, Scientists Say : ScienceAlert
This Physicist Says Electrons Spin in Quantum Physics After All. Here’s Why : ScienceAlert
Scans of Mummified ‘Golden Boy’ Reveal He Was Covered in Magical Protections : ScienceAlert
Lightning Strikes Create a Strange Form of Crystal Rarely Seen in Nature : ScienceAlert