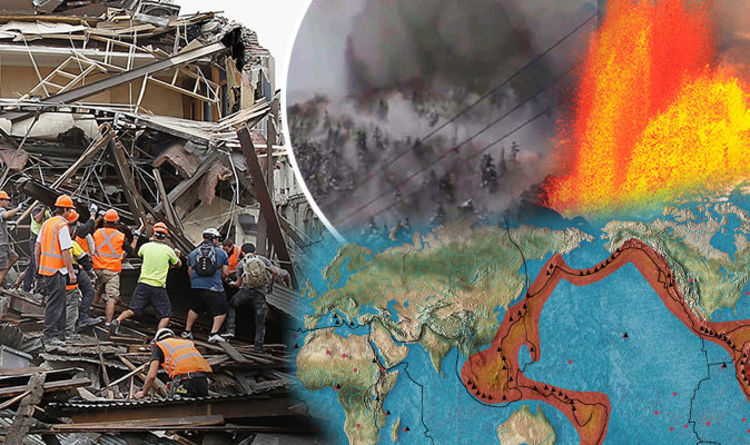 In the last few hours earthquakes have brought terror to Alaska, Papua New Guinea, Mexico, Indonesia, Hawaii and Chile while Japan has seen the spectacular eruption of Mount Kusatsu-Shirane.

All of which are situated on the Ring of Fire – a deep, and well-documented conjunction of the planet’s underlying tectonic plates – like global paving stones which entire continents sit on.

These plates are so huge even the slightest shift results in massive tremors, volcano activity and tsunamis.

The most recent of the tremors came near Alaska where a powerful 8.2 magnitude quake struck, prompting fears of tsunamis that could devastate the US west coast, Hawaii and Canada as well as Alaska.

The Ring of Fire is the largest and most active fault line in the world, stretching from New Zealand, all around the east coast of Asia, over to Canada and the USA and all the way down to the southern tip of South America.

And with the current spate of catastrophic quakes, people around the globe are worried that more devastation is on the way.

Facebook user Jackie Chang posted on the social media site: “7.9 magnitude earthquake in AK, following eruption of Mayon Volcano. The Ring of Fire is lit up! Tsunami warnings for all of U.S. West Coast. Stay safe.”

Another user, Amarjeet Singh, posted: “Earthquake in Indonesia this morning and an 8.2 off Alaska just now.

“Beware of more quakes, especially aftershocks and especially if you live around the ring of fire.”