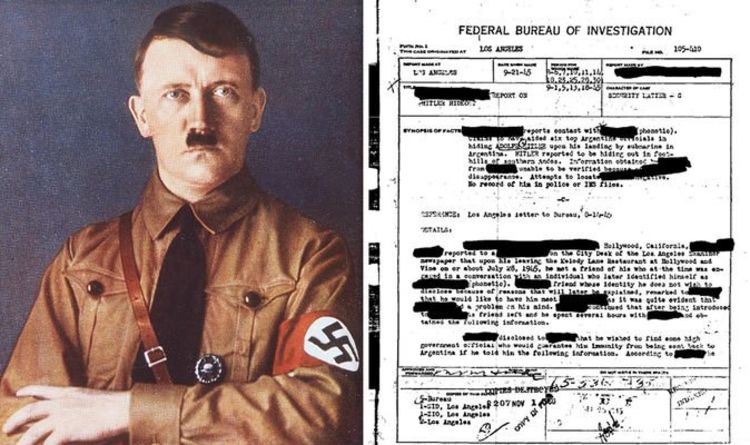 
Adolf Hitler was the evil World War 2 mastermind behind the Holocaust and responsible for the systematic murder of six million Jews. On April 30, 1945, he took his own life inside his Fuhrerbunker in Berlin as the Red Army closed in on the German capital. However, the Soviet Union was not entirely convinced this story added up.

The Nazi Party leader is believed to have shot himself with a single bullet to the head.

In accordance with Hitler’s prior instructions, his remains were carried up the stairs through the bunker’s emergency exit, doused in petrol, and set alight in the Reich Chancellery garden outside the bunker.

Berlin was surrendered on May 2, 1945, and records in Soviet archives suggest any remains of Hitler, alongside his wife – Eva Braun – were burned and exhumed.

However, Soviet authorities later claimed Hitler was still alive due to there being no trace of his body and Joseph Stalin outright told former US President Harry Truman he was in Argentina.

This fueled rumours that Hitler escaped the bunker and made it to South America in a German U-boat – an idea that would later come to be probed by the FBI.

Declassified federal documents claimed a man matching Hitler’s description had been seen arriving in Argentina alongside 50 other Nazi officers, his dog and a personal doctor, as part of a pre-arranged deal with Argentinian officials.

He had apparently shaved off his moustache and was suffering from asthma and ulcers, but was quickly taken via horseback to a private ranch.

Harry Cooper, who has been researching the rumoured escape for years, claimed in 2015 he could document up to 30 years of Hitler’s survival after the war.

He said: “Hitler did indeed escape Berlin and lived out his life in relative peace and comfort in Argentina for 20 or 30 years after the war.

“My research proves the country knew he got away – one of our agents spent two or three weeks digging out files in the national archive they did not even know they had.

“They all flat-out state they knew Hitler got away and these are from June through to September 1945.

“We have hundreds of files from the early days that prove the government knew it.”

However, despite the alleged sightings, it would later be admitted by the Russians that the KGB had kept a small piece of Hitler’s jaw.

According to renowned British historian Sir Ian Kershaw, the dental remains matched that of Hitler.

In 2009, American researchers also performed a DNA test on another fragment said to be from Hitler’s skull, discovered two years later near his bunker.

However, that DNA test and examination indicated that it belonged to a woman less than 40 years old.

It was later admitted that the Soviet Union had purposely fabricated the idea that Hitler was still alive for politically motivated reasons, using it as leverage against the Western Bloc.

Scientists Just Broke The World Record For The Most Powerful Stable Magnetic Field : ScienceAlert
Thinking Hard and Long Can Cause Brain Drain : ScienceAlert
Many Cat Lovers Are Giving Their Cats Unwanted Affection, Study Suggests : ScienceAlert
Plants Have Been Keeping a Secret From Us About How Thirsty They Actually Are : ScienceAlert
Researchers in South America Discover a New Species of Tiny but Tough Dinosaurs : ScienceAlert