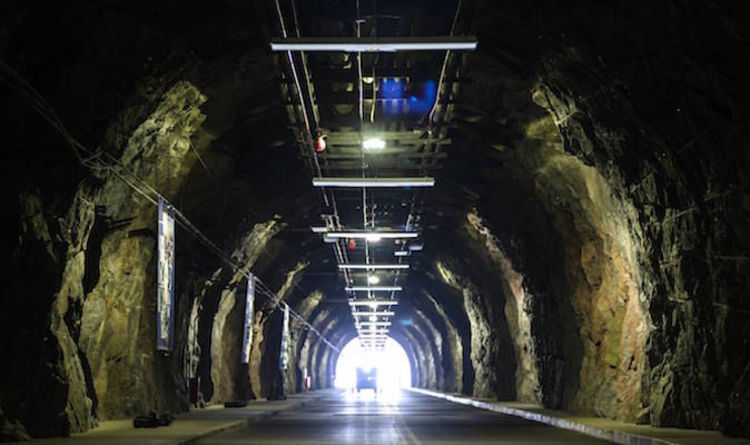 
The bunker is situated beneath The Greenbrier, a luxury four-star resort near White Sulphur Springs, West Virignia.

The high-class resort and hotel has attracted wealthy businessman, politicians and bankers since it was built in 1858.

During World War II, the hotel was briefly used as a detention centre for diplomats of enemy countries.

But rather than white sand dune golf bunkers, those checking in to the resort were unknowingly sitting next door to a post-apocalyptic nuclear protection facility, which was first discovered in 1992.

The bunker is big enough to hold all 535 members of Congress, in the event of a nuclear attack on Capitol Hill during the period.

The 112,544 square-foot facility was completed in 1961 and had enough beds and supplies to service all of the lawmakers, plus a personal assistant for each member of Congress.

Inside the bunker are decontamination chambers, an intensive care unit and a communications briefing room.

It also contains a television broadcast center with a large backdrop of Capitol Hill.

The bunker itself is set within three to five feet of concreate to protect the Senate from radiation poisoning and further attacks.

The “government relocation facility,” known in its infancy as “Project Greek Island” began with a proposal from the Eisenhower administration.

And much of the bunker is used as a private data storage facility – but a section is still open to visitors by guided tour.

It’s not the first time that potential Doomsday shelters have been reported on in the US.

In March of this year, a string of Doomsday Bunkers were put up for sale for £20,000 each in South Dakota.

The underground homes, designed by survival company Vivos and built between 1941 and 1967, stretch across 18 square miles in one of the ‘safest areas of North America’.

Over 100 miles from known military nuclear targets as well as away from large bodies of water, the location hopes to help survivors have the best chance.

Oldest Known Dog Bone Hints Our Best Friends Were With Us Earlier Than Thought : ScienceAlert
Colossal Discovery on Mars Could Drive Surging Magma Under The Surface : ScienceAlert
Millions of ‘Silent Synapses’ Could Be The Key to Lifelong Learning : ScienceAlert
It Sounds Crazy, But Walking Backwards Is Really, Really Good For You : ScienceAlert
Chilling Glimpse Into Our Future if We Survive Another Million Years : ScienceAlert