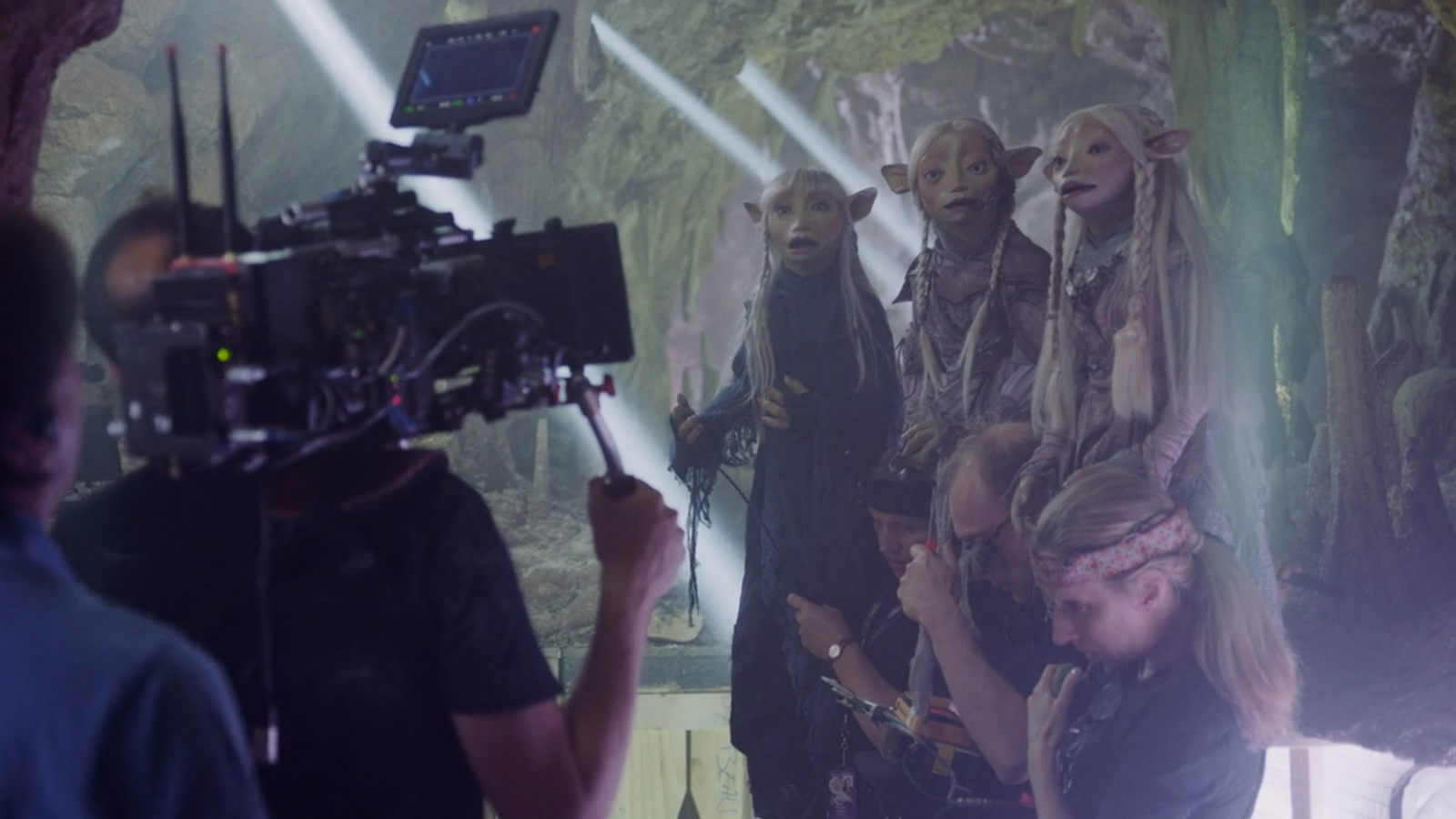 
A wonderful thing happens when you roll the credits on the final episode of The Dark Crystal: Age of Resistance: you’ve finished watching one of the best TV shows of the year. But then another wonderful thing happens: The Crystal Calls, an almost hour-and-a-half long making-of documentary, immediately queues up.

If you’re anything like me, no matter how late is was or tired you were by the time you’d finished Age of Resistance, the mere revelatory existence of such a documentary was enough to goose you up with more energy to watch it immediately than a fistful of espressos. The Crystal Calls is a beautifully earnest love letter to craft, a lens into the passion that brought Jim Henson’s incredible vision of an alien, fantastical world into the 21st century. It’s also just jam-packed with some really neat tidbits about what it actually took to do all that, and the long-road there.

The Dark Crystal: Age of Resistance Saves Its Best Surprise for After the Credits

Thanks to Marvel, we live in the post-credits sequence era, whether it’s at the cinema or on TV.…

It’s well worth a watch, but if you needed more convincing, here are eight little details from it to whet your appetite for some behind-the-scenes puppet goodness.

1) The suggestion to make Age of Resistance live-action came from Netflix.

Originally the Jim Henson Company approached Netflix with the intent of pitching an animated series based on the beloved film. But creatives at Netflix had a counter offer—they didn’t want to make an animated The Dark Crystal, so what would it take to do it all with actual puppets? The Henson team leapt at the chance, despite knowing the cost would be high, and the seeds of Age of Resistance were sown.

2) Originally, a test pilot was made with completely CG Gelfling.

Early on however, it wasn’t going to be a completely live-action series. In 2016 a test reel was made with the help of VFX workhouse Double Negative, featuring a Skeksis chasing a young female gelfling through the Crystal Castle. The thing was though, only one of them was a puppet: the Gelfling was a purely CG creation, with Lisa Henson, a producer on Age of Resistance as well as daughter of Jim Henson himself, citing her father’s somewhat disappointment that more wasn’t done on the original film to make Jen and Kira feel more lifelike. Ultimately, the clash between a pure CG character and a tangible puppet was too much and it was decided to make do puppet Gelfling once more.

3) There are still some CG enhancements to the puppets, though!

That’s not to say CG still didn’t play a role in their development. While the Gelfling in Age of Resistance are all puppeteered, physical characters—crafted with the same kind of latex the originals were, controlled with a mix of radio-controlled animatronics, rods, and the puppeteers themselves—after offering a test reel based on footage from the original movie, the VFX team embellished the base performances for Age of Resistance’s Gelfling with subtle blinks and facial movements to humanize the Gelfling even further.

4) The Podling language is real.

J.M. Lee was the writer of several Dark Crystal young adult novels prior to Age of Resistance even existing as a concept, that ultimately served, alongside previously released graphic novels, as the basis for a lot of the world-building concepts for the show, like the seven Gelfling clans being a matriarchal society.

But Lee’s other major contribution in the writer’s room was his interest in linguistics, creating a Podling-English reference guide given to actors and puppeteers that broke down the phonology and structure of Podling language so they could both accurately pronounce it, but attempt to convey meaning that felt real and understandable if you tried to translate their language into English.

5) The crew turned to a YouTuber to help make one of the show’s cleverest moments come to life.

As if there wasn’t enough creative flexing in this show, they also added a bloody puppet show within a puppet show! The mythology-laden moment of puppetry crafted by the Heretic and the Wanderer to show Deet, Rian, Brea, and Hup what they need to do to fight back against the Skeksis is one of the most visually imaginative moments in the show.

But while the production crew on the series was jam packed with master puppeteers, for the even smaller puppets these puppets were meant to be manipulating, they turned to YouTuber Barnaby Dixon, who had previously gone viral with his videos about incredibly intricate finger puppet creations he’d made. You can check out some of his videos here!

6) Puppeteering a Skeksis is no easy feat.

From a tiny scale to a far bigger one, the Skeksis were an altogether different challenge for the puppeteers on the show. The new puppets for the villains were actually larger than the ones made for the original movie and weren’t simply just rested on the shoulders of their puppeteer like a Gelfling or Podling could be.

The Skeksis were built on a rig a puppeter could strap into—with just about enough space for a second to also hide under and help manipulate—that gave them the freedom to move with their hand held up manipulating the head and mouth of the Skeksis, while attached around their midriff was a small screen that let the performer get multiple camera feeds to help both shape their performance and also see out of the Sekis costume. A bit more elaborate than simply sticking your hand up through a puppet’s head!

7) Two generations of the Froud family helped bring the show to life—thanks to the Baby from Labyrinth.

The artist Brian Froud, responsible for capturing the quaint fantastical world of Thra for the original film and his wife Wendy—a puppet maker on the original film who met Brian while making it—also worked on Age of Resistance in similar capacities. But the Frouds were also joined by their son, Toby, who acted as a creature and costume designer for Age of Resistance. That meant that the Frouds were often collaborating as production continued, translating Brian’s artwork (he designed many, if not most, the characters and costumes for Age of Resistance) into tangible objects.

The Baby From Labyrinth Was a Key Player on The Dark Crystal: Age of Resistance

The Jim Henson Company knows how to keep things in the family. The Dark Crystal: Age of Resistance…

And yes, really, Toby Froud really is the baby from Labyrinth. All grown up, but still working with his parents! Now his work just happens behind the camera.

8) Lore the stone guardian was going to be fully CG, until it was decided to simply blue screen his puppet performers out of the picture.

Even with the decision to be a live-action, primarily puppet-based show, not all characters and creatures in Age of Resistance are purely puppets—while there were full-scale puppets of them for some scenes, the spider-like Arathim, for example, were mostly realized in computer graphics. Lore, the stone guardian Brea uncovers hidden underneath the throne of the All-Maudra, was going to be one of them… until the puppeteering team saw early designs for the character and potential animation techniques to bring the pile of rocks to life and got excited about the prospect of making Lore a lavish, multi-person puppet. The key? Accepting that they could get Lore’s puppeteers clad in blue screen-material jumpsuits and simply edit them out of shots afterwards.

A CG Lore model to enhance the work done on set with the physical puppet was also made—with the twist that it was animated with a wire frame rig that didn’t just compose Lore himself, but emulated the way the actual puppet was controlled on set, with three humans (one for each arm of lore and then one for its body and feet, essentially having Lore strapped on front of them) walking around behind, to accurately create a similar gait and movement process for the times Lore needed to be partially or fully CG.

The Crystal Calls is something rare—especially for a streaming service undertaking like Age of Resistance. Behind-the-scenes material is usually left to the confines of bite-sized social media snippets or home release bonus features, never enough to truly dive into what it takes to make any show, let alone one as uniquely crafted as Age of Resistance. It’s every bit worth the watch as the show it’s actually about is.

For more, make sure you’re following us on our new Instagram @io9dotcom.

Thousands of Species Are Fleeing to Earth’s Poles en Masse, And a Pattern’s Emerging
Chimps Smack Their Lips in Rhythms Uncannily Similar to Human Language
Many Astronomers Now Think Planet Nine Might Not Exist After All, Here’s Why
There Was a Special, Extra Payload Onboard SpaceX’s Historic Launch Yesterday
5 Ways You Can Help Stop The Coronavirus ‘Infodemic’ That’s Hurting Everyone