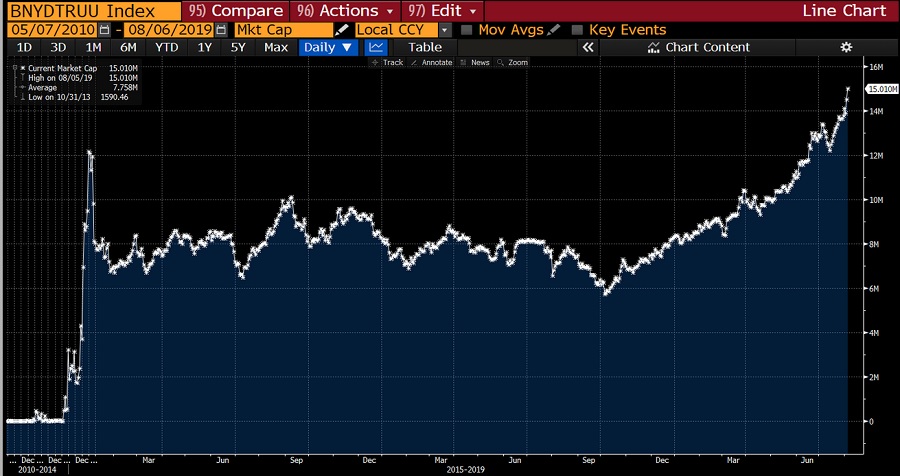 
According to the mainstream media the economy is in recovery mode.

But when you look at the reality of the situation, take into account the actual debt numbers, and then think about your own financial situation, recovery starts to look like nothing more than a media hyped fairytale. A fairytale that at some point is going to have very unhappy ending. Here a compilation of 6 recent news articles showing that we are heading towards a gruesome financial crisis.

In the first seven months of the year, U.S.-based companies announced 42,937 job cuts due to bankruptcy, up 40% on the same period last year and nearly 20% higher than all bankruptcy-related job losses last year, a report released Tuesday concluded. Despite record-low unemployment, bankruptcy filings have not claimed this many jobs since the Great Recession.

2. Global economy is probably in recession

The global economy is probably in recession, with most cyclical indicators showing business activity is flat or falling although policymakers are reluctant to announce a recession for fear of harming consumer and business confidence and worsening the downturn. But almost all the main economic and industrial indicators that provide a reliable guide to the business cycle confirm the economy has already slowed severely, as shown in this column.

Following years of depressed farm income and rising debt levels, a review of the Federal Deposit Insurance Corporation (FDIC) quarterly report by Tri-State Livestock News reveals that “delinquency rates for commercial agricultural loans in both the real estate and non-real estate lending sectors are at a six-year high.” Delinquency rates for commercial lenders haven’t been this high since 2013.

The latest eruption in the U.S.-China trade dispute pushed a widely watched Treasury-market recession indicator to the highest alert since 2007. Rates on 10-year notes sank to 1.714% on Monday, completely erasing the surge that followed President Donald Trump’s 2016 election. At one point, they yielded 32 basis points less than three-month bills, the most extreme yield-curve inversion since the lead-up to the 2008 crisis.

5. Germany, Italy, and the UK in Recession

Three of Europe’s biggest economies – Germany, Italy, and the UK – are probably in recession — and the ECB is out of bullets. This could spell danger for the eurozone. Germany, Europe’s industrial backbone, is stuttering. The unemployment rate has risen for the second time in three months. The UK economy contracted for the first time since 2012, as output fell 0.2% in April to June. Italy’s debt crisis is only being made worse by political uncertainty.

Every day brings new indications that the financial world is going from already nuts to even nuttier. According to Bloomberg, the total amount of bonds outstanding globally that are trading with a negative yield exceed for the first time $15 trillion.

Another day, another new record for negative yielding debt. Now the total value is more than $15 trillion worldwide. pic.twitter.com/R2a3cEioff

This includes government and corporate debt, and also some euro junk bonds that have joined the elite group.

Well these are the most recent news that I have found. Maybe you have some other links. If so please add them in the comments below.

This Species of Carnivorous Plant Evolved Into a Toilet And Is Now Winning at Life : ScienceAlert
An Expert Explains Why The Radioactive Water Stored at Fukushima Should Be Released : ScienceAlert
People Who Don’t Exist Look More Real Than Actual People, Study Finds : ScienceAlert
‘Funky Worm’ Fossil Helps Explain The Mysterious Origins of Amphibians : ScienceAlert
Scientists Create Shapeshifting Humanoid Robot That Can Liquefy And Reform : ScienceAlert