Researchers have shown that crystals can be so flexible they can be bent repeatedly and even tied up in knots, overhauling our current understanding of the structures, and challenging the very definition of a crystal.

As we learnt in school, crystals are brittle and inelastic – if you try to bend a crystal of rock salt or quartz, for example, it will break. But this new research shows that crystals can actually be made to bend, opening up a whole new class of materials that could revolutionise electronics and technology.

Scientists had previously made observations of crystals that could bend, but this is the first time researchers have examined the process at the atomic level, and determined that crystals really can be flexible while still retaining their traditional properties, flipping all current conventions around the structures on their head.

“Crystals are something we work with a lot – they’re typically grown in small blocks, are hard and brittle, and when struck or bent they crack or shatter,” said one of the lead researchers, John McMurtrie, from Queensland University of Technology (QUT) in Australia.

“While it has previously been observed that some crystals could bend, this is the first study to examine the process in detail. We found that the crystals exhibit traditional characteristics of not only hard matter, but soft matter like nylon.”

You can see the flexible crystal below:

Crystals are brittle because of the way their molecules are arranged – they’re highly organised structures that are made up of infinitely repeating molecular components. That means no matter which way you look at a crystal structure, it will look the same.

It’s this property that makes them so useful in a range of modern technologies, from smartphones to computers. But it also makes them hard, and easy to break or shatter, so they’re not as useful in emerging technologies, such as flexible electronics and optical devices.

But this new research has shown that it’s possible to grow elastic crystals that can be bent over and over again, before quickly restoring their original shape, just like nylon. 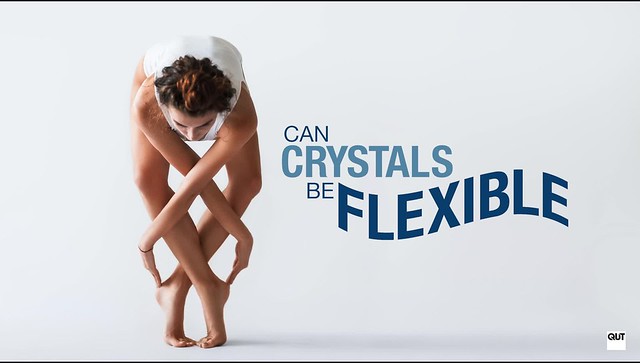 The team was able to grow these elastic crystals about the width of a fishing line and up to 5 cm long.

Most importantly, these flexible crystals still retained all the traditional properties of crystals we rely on in our technology – essentially making them a brand new type of material altogether.

“The crystals that we have prepared fall outside the limits of what have traditionally been considered to be hard and soft matter,” the lead researchers write over at The Conversation.

The researchers grew their flexible crystal from a common metal compound known as copper (II) acetylacetonate. The compound was first made in the late 1800s, but changing the way the molecules were arranged within the crystal gave it new flexible properties.

Using X-rays generated by the Australian Synchrotron, the team was able to study the molecular arrangement of the crystals as they were bent, showing that the individual molecules reversibly rotated to give the material its elasticity.

“Under strain the molecules in the crystal reversibly rotate and reorganise to allow the compression and expansion required for elasticity and still maintain the integrity of the crystal structure,” said Jack Clegg, who led the collaborating team from the University of Queensland.

Once they understood how it works, the researchers were able to show that crystals made from six other structurally similar metal compounds were also flexible.

“This is an exciting prospect given that there are millions of different types of crystals already known and many more yet to be discovered,” said McMurtrie.

Now that we know how these flexible crystals work, the next challenge will be trying to figure out what this means for our current definition of a crystal – or if we’ve in fact discovered a new type of material altogether.

“For example, the loss of symmetry when a crystal is bent or twisted means it is no longer strictly a crystal by traditional definitions,” Clegg and McMurtrie write for The Conversation.

“Flexible crystals like these could lead to new hybrid materials for numerous applications, from components of planes and spacecraft to parts of motion or pressure sensors and electronic devices,” said Clegg.

The research has been published in Nature Chemistry.

Queensland University of Technology is a sponsor of ScienceAlert. Find out more about their research.

Mind-Blowing Video Reveals The Formation of Salt Crystals From Individual Atoms
How to Have a COVID-Safe Car Ride, According to Science
The Massive Genome of The Lungfish May Explain How We Made The Leap to Land
The Oldest City in The Americas Is an Archeological Wonder, And It’s Under Invasion
Ingenious ‘Wrinkled’ Graphene Could Be The Most Promising Water Filter Yet