To people who live in Earth’s northern hemisphere, this astronomical event signals the arrival of spring, winter’s end, and the increasingly warm and brighter days that come with the pending arrival of summer.

For those in the southern hemisphere, though, it’s now the fall: The days are growing shorter, the weather is cooling off, and sunlight is growing dimmer as winter approaches.

What drives this all-important seasonal clock?

Technically, two things: Earth’s tilted axis and the planet’s orbit around the Sun.

How the spring equinox works

Earth orbits the Sun once every 365 days and 6 hours. Our planet also rotates once per day around a tilted axis.

That tilt is about 23.5 degrees (for now) and bathes different parts of the world with various intensities of light over the course of a year.

Meanwhile, the planet’s rotation keeps the heating even, sort of like a 12741 kilometer (7,917 mile) wide rotisserie chicken made of rock and a little water.

The spring equinox occurs when the Sun’s warming rays line up perpendicular to Earth’s axial tilt:

An illustration of the spring equinox. (Shayanne Gal/Business Insider)

If you stand directly on the equator at noon in the Eastern Time time zone at noon, the Sun will appear more or less directly overhead. Your shadow will also be at its absolute minimum.

The Sun also sets and rises roughly 12 hours apart during the equinox.

But this moment won’t last as Earth makes its way around the Sun at a speed of roughly 107182 kilometres per hour (66,600 miles per hour).

Our planet’s orbit is elliptical and its center of gravity slightly offset from the Sun, so the time it takes to cycle through the seasons isn’t perfectly divvied up.

About 92 days and 19 hours after the spring equinox, Earth will reach its summer solstice, or when the most direct rays of the Sun reach their northernmost latitude, called the Northern Tropic (or Tropic of Cancer).

Another 93 days and six hours later, the fall or autumnal equinox will occur.

Then it’s another 89 days and 19 hours to the winter solstice – when the most direct sunlight strikes the Southern Tropic (or Tropic of Capricorn) – and another 89 days to get back to the spring equinox. 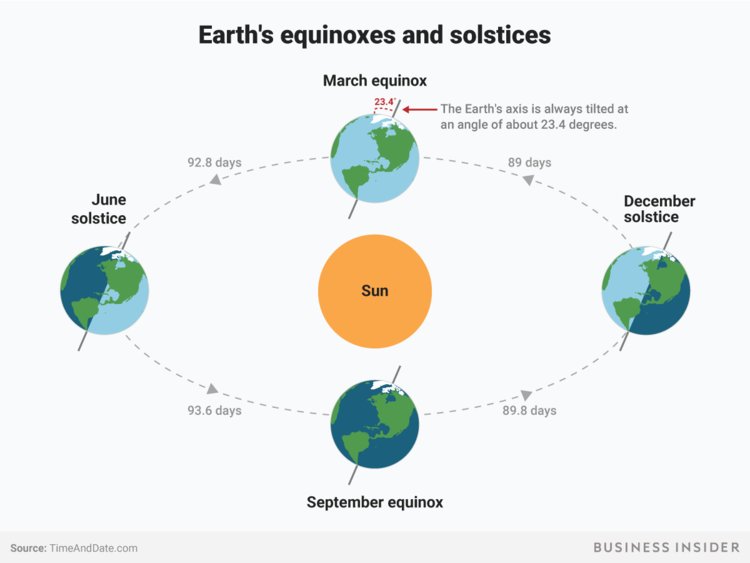 An illustration of the spring and fall equinox and the summer and winter solstice. (Shayanne Gal/Business Insider)

Some satellites fly around Earth in a geosynchronous orbit, which means they move fast enough to hover above one spot on the planet.

This creates a great opportunity to photograph the planet over the course of the year and see how the the angle of Sun changes.

What about the egg-balancing trick?

That whole balance-an-egg-on-its-end-during-the-equinox business is a myth.

You can balance an egg any old time you want, thanks to very small pores in its shell.

Those pores create nearly invisible dimples in the shell upon which a (very, very) patient person can stand up the egg.

And don’t look for any gravitational interplay between Earth and the Sun to help you out; it’s far too weak to make a noticeable difference.